Fountain City Bobcats come from behind to beat Sweetwater

By design on June 28, 2020Comments Off on Fountain City Bobcats come from behind to beat Sweetwater 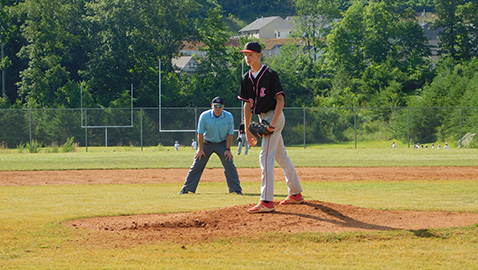 If Fountain City Bobcats baseball coach Kevin DeBusk knows one thing about his team it’s that no deficit seems insurmountable.

And the Bobcats proved that Thursday as they fell behind Sweetwater early only to storm back and claim an 8-6 victory over the Wildcats in a summer league baseball game at KCS.

The early chapters of this saga belonged to Sweetwater, which opened a 5-0 advantage by the top of the third inning on a warm summer late afternoon in West Knox County.

But undeterred, the Bobcats began chipping away at their deficit in the bottom of the third frame.

Jay Faulkner singled to lead off the inning and he would later steal second. Garrett Mauldin then drew a one-out walk to put runners on first and second.

Both runners came home on a two-run single by Logan Rodenwald to make the score 5-2.

In the top of the fourth, Joe Meade, who started the game in right field for the Bobcats, came in to pitch. He held the Wildcats at bay by striking out the side in order in the inning.

In the bottom of the frame, Meade delivered with his bat as he got one of three RBI singles in a five-run inning to help Fountain City take a 7-5 lead.

Mauldin and Rodenwald also knocked in runs with hits. Ethan DeBusk came home on an error in the inning and Jacob Pointer scored on a wild pitch and from there, the Bobcats never trailed again.

Sweetwater, however, pulled to within 7-6 in the top of the fifth frame.

Fountain City plated an insurance run in its half of the fifth when an RBI single by Ethan DeBusk drove in Austin Ellis, who singled earlier in the inning.

The Bobcats’ pitching staff finished things with a flourish when Mauldin struck out the side in the top of the seventh.

Coach DeBusk commended his squad’s effort after the comeback victory.

“This team never gives up,” he said. “They don’t know how to quit. They’ve battled from behind a couple of times in this league.

Fountain City Bobcats come from behind to beat Sweetwater added by design on June 28, 2020
View all posts by design →