By design on October 1, 2017Comments Off on Fulton Routs Carter on Homecoming 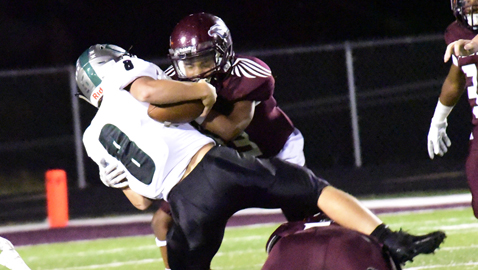 Carter attempted a fake punt, but Austin Lemons threw an incomplete pass, and the Falcons took over at the Hornet 15-yard line. On the next play, Malone threw a 15-yard touchdown pass to Joey Smith for a 14-0 Falcon lead.

Carter found itself down by two scores with just four minutes gone by. The Hornets could not get anything going offensively as the Falcons stopped Carter, and Carter punted from its own 15-yard line. Williamson fielded the punt at the Hornets’ 47-yard line, cut across the field, and ran down the sideline for a touchdown, his second of the game. Fulton missed the extra point but led 20-0 with 6:12 left in the first quarter.

Taking advantage of being in Hornets’ territory again, Fulton scored again on a one play drive. Malone threw a 31-yard touchdown bomb to Jashaun Fenderson. This time, the Falcons made the extra point, and Fulton led 27-0 with 4:31 left in the first quarter.

Malone talked about the big play nature of Fulton’s touchdowns. “We just came out and attacked,” he said.  “Get the ball to the playmakers, and that’s all I did and they made it happen.”

With all the scoring in the first quarter, Fulton slowed down a little and scored its only points of the second quarter on Jashaun Fenderson’s 48-yard pass to Deshaun Page on a fake reverse play. Fulton led 34-0 with 10:30 left in the second quarter.

Carter forced a safety for two points on Fulton’s next possession. However, the Hornets’ quarterback Kobe Wilson fumbled the snap on the ensuing Hornets’ possession, and Fulton’s Jacquez Booker recovered.

Carter recorded another safety as the Hornets tackled Page in the end zone, but Fulton still led 34-4 at the half.

Carter got its only touchdown of the game on backup quarterback Preston McNew’s 16-yard touchdown run. It came with 4:30 left in the fourth quarter. McNew’s touchdown left the final score at 47—11 Fulton.

Fulton had 304 total yards of offense to 198 total yards for Carter. Malone finished the game 13 for 22 passing for 235 yards, four touchdowns and two interceptions. Carter only had 54 yards passing on 6 for 31 and three interceptions. Both Fulton and Carter had two fumbles.

“Anytime you turn it over is a concern,” Fulton Head Rob Black said. “We got to get better at that. We were able to overcome it tonight, but down the line we’ve got to get that fixed,” he added.

“We weren’t as good as I would have liked to have been,” Black said. “On offense, defense, and special teams, we made enough plays for it to look good,” he added.

Fulton Routs Carter on Homecoming added by design on October 1, 2017
View all posts by design →