By design on April 10, 2016Comments Off on Gary Carter outlasts friend and rival to help Farragut down HVA 5-4 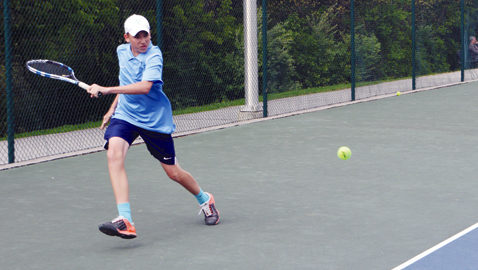 If ever a match summed up a day at the tennis courts, it was the No. 1 singles showdown between Farragut’s Gary Carter and Hardin Valley Academy’s Spencer Chaloux.

Carter, who reached the Class AAA State Tournament in Murfreesboro last season, outlasted his friend and rival 9-8 (7-5) in a thrilling match at the top singles ladder spot.

Carter and Chaloux have a long standing rivalry and friendship. The two have played 15 times over the years with Carter now holding a 14-1 advantage in head-to-head matches.

But Carter is never going to take his buddy lightly.

“Despite what my record is against him, I know that he’s not going to make things easy for me,” Carter said of Chaloux after the Admirals outlasted the Hawks 5-4 in a District 4-AAA match at the West Hills Tennis Complex. “We’ve played like 15 times and he’s only beaten me once, but he’s always going to challenge me.

Despite the loss, Chaloux was pleased with his effort on a chilly and windy day in West Knoxville.

“I thought I played really well,” he said. “I’m pretty happy with the way I played.

“The wind was definitely a factor. I think it made things a little harder on him than it did on me. But we had a great match.”

The No. 1 singles match left both coaches impressed.

“That was a great match that could’ve gone either way,” Admirals coach Ben Lyle said. “One shot either way could’ve changed things.”

“That was really high quality tennis,” Rayman said. “That was the best his school pro set that I’ve ever seen and I’ve been doing this for four or five years.

“This match will make both of these players better, especially when they get into an elimination tournament draw. They can both draw on the experience that they had today.”

At No. 2 singles, Farragut’s Garrett Carter (Gary’s brother) celebrated his 17th birthday with an 8-2 victory over Hardin Valley’s Josh Ott.

“It feels great to come out here and get a win on my birthday,” Garrett Carter said.

The Admirals picked up wins at both No. 4 and No. 5 singles as Jerry Zhou downed Derek Ott 8-4 and Davis Luna outlasted Preston Young 9-7. At No. 6, Hardin Valley’s Brandon Chu defeated Zach Collins 8-0.

The Hawks claimed two of the three doubles matches. HVA’s tandem of Josh Ott and Derek Ott beat Poindexter and Zhou 8-4 in the No. 2 slot. At No. 3, HVA’s Boden and Chu notched an 8-1 win over Farragut’s duo of Cameron Fang and Crawford Hullender.

The Admirals won at No. 1 doubles as Gary Carter and Garrett Carter downed Chaloux and Young 8-4.

Gary Carter outlasts friend and rival to help Farragut down HVA 5-4 added by design on April 10, 2016
View all posts by design →