Getting to know Larsen Jay

By design on March 31, 2019Comments Off on Getting to know Larsen Jay

Larsen Jay's Random Acts of Flowers is a busy place during the week as staff and volunteers go through donated flowers and create new bouquets to be distributed to hospitals, nursing homes, etc. The non-profit organization headquarters in Knoxville now has three other locations around the nation. (Photo by Mike Steely) 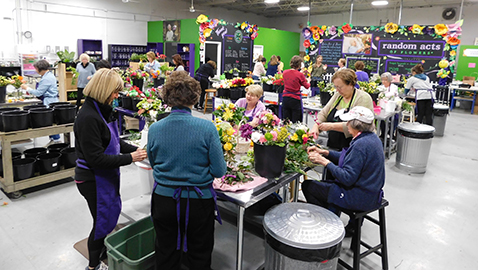 In this week’s Getting to Know feature, The Knoxville Focus chatted with someone who positively impacts other people, people he may never meet, and what he does comes as a welcomed surprise and sometimes brings tears of gratitude. Larsen Jay is a husband, father, Knox County Commissioner and founder of Random Act of Flowers. Most people don’t know that Jay also has a background in TV and movie production.

How has your position as founder and CEO of Random Acts of Flowers worked for you?

It has been thrilling, half terrifying and always exciting as we continue to help the community. My wife and I were involved in many things before this, like bringing the ice rink back downtown, starting the East Tennessee Chili Cook Off and the Daddy-Daughter Dance, restoring a historic building and serving on nonprofit boards. We started Random Acts of Flowers as a 501(c)3 non-profit organization and thought we’d hand it off after it got started. It accepts no public funds, everything is donated and nothing is wasted. We exist through grants, corporate support, and private, direct fund raising.

We now have four branches around the country, 18 employees and over 2,000 volunteers and are approaching our 500,000th floral delivery. It’s going very well.

How did Random Acts of Flowers get started?

In 2007 I had a near fatal accident when I fell off a ladder on the roof of my workshop, about one and one half stories. Ironically, I often say it was the best thing to happen to me. It changed my priorities. When I was in the hospital I had flowers brought to me every day, lots of them. It was like a jungle in my room of joy and happiness. I notice many others in the hospital had no flowers and no visitors. So we loaded up my wheelchair and made deliveries to those people and boy did it make a big impact.

One year to the day of my accident we began Random Acts of Flowers, at first on a small scale. We’re now also inspiring dozens of others to start similar organizations. We’re building a whole new industry, sort of like food banks.

We get flowers donated from places like retail and grocery stores, wedding venues, florists and funeral homes. The reception and gratitude from people is times-ten the effort and you won’t believe the cards and letters I get from those receiving flowers.

After the first few years, I started getting calls from around the country about Random Acts of Flowers. Now we have three other locations and other places have started similar organizations. We’re headquartered here in Knoxville with locations in Tampa Bay, Chicago and Indianapolis.

Tell us about your family.

Adrian and I have two boys, Henry and Alexander. We’ve been married 14 years and met in Knoxville. I had moved here from Los Angeles where I was a TV and movie producer. I rented the second apartment in the Sterchi Building and was interview by Adrian MacLean, a reporter for WATE TV. We were engaged six months later.

Were you born in Knox County?

I was born on an Air Force base in San Antonio, Texas and my family moved around to Atlanta, Louisiana, and upstate New York. After high school, I looked for a college with a good theater department and wanted to be a scenic designer. I went to UT, learned at the Clarence Brown Theater and the Bijou Theater, and got my degree. Back in the 90s I went to Dallas, which was big in the film industry then, and then to Los Angeles where I eventually worked my way up to producer. I was fortunate to work on films like Erin Brockovich, Universal Soldier: The Return, Madison and Big Fat Liar.

But I found a lack of community in L.A. so I returned to Knoxville where I produced TV for RIVR Media, then went on to start my own production company, DoubleJay Creative.  I’m most proud of my wife and I producing Hal Holbrook’s movie That Evening Sun, featuring his late wife Dixie Carter.

What is your main hobby or interests in your private life?

I play ice hockey now and then. My grandfather was a veteran of World War II and a chaplain. I have his 1951 Ford F2 truck that I’ve been restoring; it has a flat-head V-8 and most of the original interior and engine. I love teaching my boys about car mechanics and love rolling the windows down and driving it in rural areas of Knox County.

What do you see as your main accomplishment in life?

My marriage and my family and Random Acts of Flowers.  I’m very proud of all of those. And getting through my accident. I had 13 surgeries, with more to come, and I haven’t had a pain-free day in 11 years. Getting through that was a big accomplishment. And telling the story of That Evening Sun, which won 16 different film festival awards.

What are your hopes and wishes for Knox County as a commissioner?

I hope we fully figure out who we are, have a vision, set lofty goals and follow through with them.

How do other people see you when they meet and get to know you?

That I’m a happy person, helpful to others, passionate and someone who likes to lead and take risks.

If you had one thing in your life you regret or could do over again?

I would have liked to serve in the military; my dad and granddad did and I feel serving is an important part of our country.

What is your favorite meal or place to eat?

I like Pete’s downtown for breakfast—biscuits, gravy and scrambled eggs.

As someone who nudged the world.  You can’t solve all the world’s problems but you can nudge it in a positive way.

Getting to know Larsen Jay added by design on March 31, 2019
View all posts by design →