By design on March 21, 2021Comments Off on Gibbs softball starts with easy district win

Senior Breanna Bumgardner prepares to take off on the bases as Gibbs opened its season last week with a District 3-AA win over visiting Pigeon Forge. Photo by James Spears. 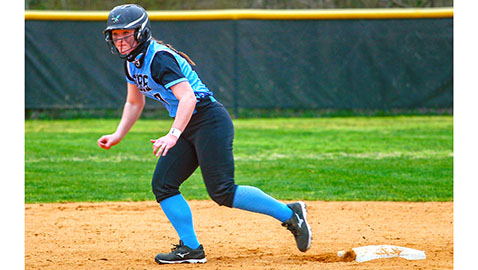 The Lady Eagles rolled past visiting Pigeon Forge 35-0 in a District 3-AA game that was mercifully stopped after 2½ innings of play.

As for the bright spots, Carol Mitchell, beginning her 28th season as head coach, said that was hard to tell.

“We didn’t get to do too much defensively and that’s what we’re concerned with,” she pointed out. “(Offensively) the score really didn’t show anything because our pop ups to the outfield should have been outs.”

But being back on the field after the pandemic had reduced the 2020 season to just four games and with rain in the forecast, Mitchell was happy the game was played.

It’s going to be interesting to see how Gibbs does this season, particularly considering its 24-player roster has four seniors, two juniors, five sophomores and 13 freshmen.

“Some of the freshmen were out there today in the starting lineup,” said Mitchell.

Some of the youngest Lady Eagles did make some noise in the lopsided affair.

Abbie Buckner, Gibbs’ sophomore starting pitcher, struck out the first two batters she faced and got the third out on a grounder to shortstop.

Gibbs came in to bat and scored 13 runs on 12 hits. Extra base hits in the frame included a triple by senior Shelby Blake and a double each by sophomore Jordann Reagan, freshman Bridgette Scully and senior Madison Watts, the team’s catcher.

The Lady Eagles’ offense racked up 21 hits in the bottom half of the frame. Ninth grader Scully got another big hit, driving a two-run homer over the left-center field fence to make it 28-0. It was the only home run in the blowout.

Later in the inning, freshman Addison Merritt drilled a single up the middle off losing pitcher Maddie Clabo for Gibbs’ 35th run.

Freshman Ruthie Hall came in to pitch the third inning for the Lady Eagles. Pigeon Forge managed to put a runner on first base, thanks to catcher’s interference.

After the third out was recorded, the Lady Tigers’ coach asked if the game could be stopped.

Coach Mitchell expects Union County to be “pretty tough and Carter possibly” in District 3-AA this season. Other teams in the district are Northview Academy and Gatlinburg-Pittman.

Gibbs’ annual tournament at Caswell Park April 9-10 will have 19 teams and include 2019 Division II-AA state champion Baylor and runner-up GPS out of Chattanooga.