By design on June 10, 2018Comments Off on Gladiators claim MS baseball title in dramatic fashion 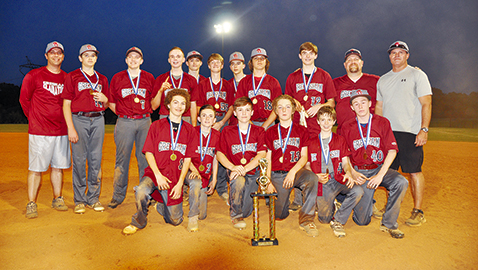 The Gladiators culminated their 2018 campaign by winning the league championship at Karns Sportspark last month. Gresham, which finished the season with a 14-2 record, was the top seed in the league’s postseason tournament.

The Gladiators won the tournament in dramatic fashion as they notched a 4-3 walk-off victory over Christian Athletics, a team comprised of home school players. Gresham won the game in the bottom of the seventh inning on an RBI double by Jay Faulkner.

The Gladiators also got a solid effort on the mound from Brady Ackermann, who threw a complete game, going seven innings. He surrendered three runs, five hits and three walks while striking out five in the championship game.

Christian Athletics forced a winner-take-all game when it knocked off the Gladiators in the opening game of the championship round. The home school squad won that first game 7-3.

“We had beaten them twice during the regular season,” Gresham coach Kevin DeBusk said. “This was a what-if game because they gave us our second loss of the season in the tournament.

“I’m really proud of these kids. Most of them grew up playing together at Fountain City Ballpark. We had some who moved in later. This is a great group of kids and they always played their best when their packs were against the wall. This is the scrappiest bunch of kids that I’ve ever seen.”

Austin Ellis also had an RBI single in the title-clinching tilt. Gresham fell behind early in that game. The Gladiators scored single runs in the second and third innings before scoring two in their final at-bat to bring the championship to Fountain City.

Elijah DeBusk singled and walked in the season finale. He scored twice. Carson Jessie doubled. Logan Rodewall singled and scored in the seventh inning while Blake McCarty had a key single in the game.

Despite losing the first game of the championship round, Gresham had a late rally come up short after falling behind 7-0.

The Gladiators manufactured enough offense to win but the team’s calling cards were pitching and defense. Gresham had a team fielding percentage of .934.

“Our kids made plays,” coach DeBusk said. “We were strong up the middle and it wasn’t that these kids made just a few plays. They made a lot of big plays.

“This team had a real high baseball IQ. They watched a lot of games on TV and we went to a UT game together. I never ran out of pitchers. The team has played together forever and I had eight quality pitchers.”

Many on the team will move on to play at Central High School. Bobcats coach Devan Parrott has thrown his support behind the Gladiators, who will play in some open tournaments on weekends over the summer.

“I’m excited to see what these kids do when they get to high school,” coach DeBusk said. “Coach Parrott came to see us in some of our games.”