Gladiators down Halls as player wins hearts of fans

By design on November 12, 2017Comments Off on Gladiators down Halls as player wins hearts of fans 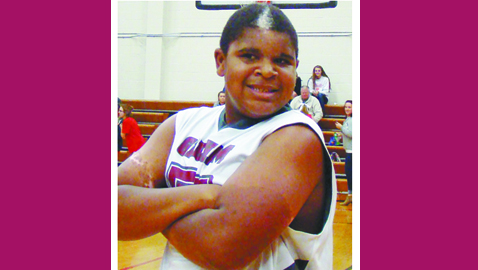 The Halls Middle-Gresham Middle boys basketball rivalry is always respectful. But it’s also intense as it’s a game that both the Demons and Gladiators need to win to claim Black Oak Ridge bragging rights.

But Thursday night, school and community loyalties disappeared — at least for the fourth quarter of a non-league tilt between the two longtime rivals.

Gresham, which notched a 68-39 victory last week, had the game well in hand when coach Joel Sampsel called on an inspirational player to go into the game at Central High School

Sampsel pleased the Gresham crowd when he tapped Sammy Long and told him to check into the contest midway through the final frame.

Long, a special education student at Gresham took the floor to chants of “We want Sammy” and “Sam-my, Sam-my, Sam-my” and that made the night special enough for the Gladiators (2-0) and their fans.

Long took some long-range jump shots from beyond the 3-point arc. And the crowd, which cheered wildly every time he launched a shot, finally erupted when one went through the hoop.

The Gladiators came off the bench first. Then their fans stormed out of the stands to congratulate their big man. The Halls players on the floor followed and then, it was the Demons’ fans who stormed the floor as both cheer teams showered Sammy with their affection.

It was a celebration that rivaled any championship party, and to their credit, the referees didn’t enforce a long-standing rule and call a technical foul. They let Long have his moment with the fans as he instantly became a superstar.

And he wasn’t finished scoring. He knocked down another 3-pointer as time expired and it was again both Demons and Gladiators faithful who made a point to congratulate Long one more time before he left the floor and returned to the Gresham locker room.

He scored six points and inspired anyone who was watching.

“It’s a great feeling,” said Sampsel, Gresham’s first-year head coach. “It’s great because he works hard and he’s as much of a part of this team as anybody.

“He does his sprints every day just like everybody else. This was a big win for us and it’s a great feeling. It’s great to see this team rally around Sammy the way that they have.”

“This is a great night for him and we’re all happy for him,” Sherrod said after watching his team fall to 0-2. “It’s always special to see a young man get the chance to come onto the floor and get a chance like this.”

Long got his break because the Gladiators used their pressure defense to create turnovers and turn them into transition buckets. Gresham led 18-10 at the end of the opening frame. The Gladiators went up 38-22 by halftime and never relinquished control of the contest.

“We had trouble breaking their press and that’s my fault,” Sherrod said. “We should’ve had a better break.

“The kids gave a great effort.”

Gresham’s Darian Bailey had 19 points to lead all scorers. Jeremiah Jeffers added 13 while Carson Jessie and Nick Ellis finished with 10 points each.

Gladiators down Halls as player wins hearts of fans added by design on November 12, 2017
View all posts by design →