By design on July 2, 2017Comments Off on Go Vote! Knoxville Aims to Increase Voter Turnout 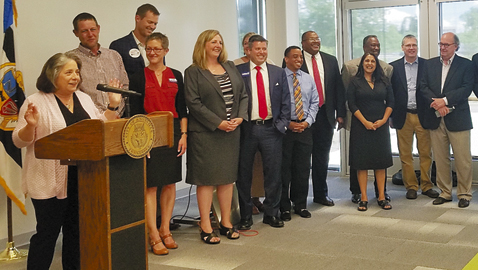 Knoxville Mayor Madeline Rogero announced a new initiative Tuesday, June 27, to increase dialogue and voter turnout in this year’s elections called Go Vote! Knoxville. The initiative will have six  get-out-the-vote public meetings, one in each of the six city council districts. At these meetings, voters can interact with and get to know the candidates running for the five open city council positions from Districts 1, 2,3, 4, and 6.

During the meetings, the City of Knoxville and local businesses will provide pizza and snacks, and there will be family games. Rogero will attend along with current council members, and The Knoxville Election Commission will also be at the meetings to register new voters, provide information, and demonstrate how to cast ballots on voting machines.

City officials will recognize the council districts that have the largest percentage turnout and the largest increase in voter participation compared with the 2009  City Council election, when there were also five seats up for election. “We’re challenging each district to beat their own record of 2009 and outvote the other districts,” Rogero said. “After the election is over, we’ll recognize in some way the council district that turned out the highest percentage of voters as well as the district that increased turnout the most from 2009.”

“Our job is trying to give people opportunities to get to know you,” Rogero said of the council candidates. “The candidates will be available at these meetings for one on one conversation with the voters,” she added.

Senior Director of Communications and Government Relations for the city of Knoxville, Jesse Mayshark, talked about how the Go Vote! Knoxville initiative came to be. In planning the Go Vote! Knoxville initiative, Mayshark said that city staff employees came together and brainstormed on ways to increase turnout. He said that employees were discussing, “Let’s try to do something before the election to encourage people to get engaged.  Our interest is in having more people involved, more people engaged in it, more people coming out to vote because we think that the government functions better when it’s more representative of more people,” Mayshark added.

In addition to the public meetings, the city will also promote awareness of the upcoming city council elections. “We’ll have the meetings but we’ll also be active on social media,” Mayshark said.

Mayshark sees an increased awareness of politics. “Coming out of the presidential election last year, there’s a heightened interest in politics in general,” he said.

The six public meetings last from 5:30-7 p.m., and the schedule is as follows.