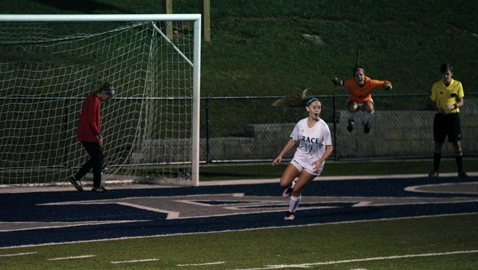 The Lady Rams and the Lady Wildcats played to a 0-0 tie through 80 minutes of regulation, 20 minutes of extra time and 10 minutes of sudden death overtime and could settle nothing as Grace goalkeeper Bryanah Hack and BGA netminder Anna Quinn French stopped every shot fired in their respective directions.

The Lady Rams and Lady Wildcats had chances to get on the board but the goalkeepers took center stage until the game went to penalty kicks after the match was declared a draw. Grace Christian moved on to Saturday’s quarterfinal round when it faced Evangelical Christian School in Cordova (results were not available at press time).

The penalty kicks shootout naturally provided a bit of drama as Lady Rams senior Sara Houff attempted the first shot and missed. Grace would eventually claim a 6-5 win and advance.

The Lady Wildcats took a 1-0 lead in the shootout when Lindsey Souter scored.

BGA took a 5-4 lead on a marker by Annie Clendenin before Katherine Browning helped the Lady Rams pull even. Battle Ground’s Alyssa White missed, leaving the door open for Grace’s Emma Moore to win the shootout and she didn’t disappoint the home fans as she buried the ball into the back of the net.

“It was just amazing,” Moore said of the game-winner. “I didn’t know that it was going to be me or nothing. But it was.

“[French] was a really good keeper and we’re just so excited.”

GCA coach Donnie Green said that he was also pleased.

“This is the first time in our nine years of girls soccer that we’ve ever gotten to this point,” Green said after watching his squad advance. “We’ve never had to go to a shootout.

“I’m just so proud of these girls. They’ve worked so hard. We went to the state in Division I last year. But in Division II, things are so much tougher and before the game, we talked about that. I stepped up our non-league schedule.”

The Lady Warriors also advanced to Saturday’s quarterfinal with a trip to this week’s semifinals in Murfreesboro hanging in the balance.

CAK played St. George’s in Collierville but results of that match were not available at press time.