By design on October 8, 2017Comments Off on Halls boys win state golf titles in historic fashion

PHOTO BY MARIANNE DEDMON Ryan Hall's 13-under-par 131 total not only led Halls High to its second straight team title, it was only one stroke off from tying the TSSAA state golf tournament record for 36 holes of play. 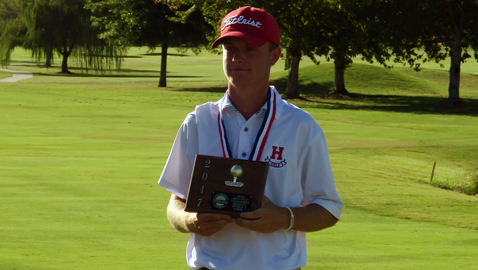 Halls’ 2017 boys golf team will go down as one of the best in TSSAA history.

The Red Devils, in fact, recorded the best-ever 36-hole score by a public school team, a 7-under-par 569, in winning the Division I Large Schools championship Wednesday at WillowBrook Golf Club in Manchester.

Only Baylor, a private school in Chattanooga, has ever shot better. Baylor posted a 565 at Winchester in 2003 and a 568 at Old Fort in 2007 during a run of six straight state titles.

A confident Halls squad combined for a 278 on the second day and pulled away for a 26-stroke margin of victory over runner-up Hendersonville (595).

The Red Devils were led by individual champion Ryan Hall’s 13-under-par 131 (66-65). The University of South Carolina commitment edged Michael Barnard (68-64) of Beech by one stroke.

Ryan’s score also was the best ever by a player on a public school team in TSSAA history and only one shot off the all-time state record of 130.

“You get to the state and you have those first round jitters,” said Halls Coach Bill Warren. “Ryan played well the first day and Jake played pretty good. We shot 3-over as a team and they felt bad.

“Three-over-par is a pretty good score. But they were in the motel that night and said, ‘Coach, we’re 3-over-par and that’s the worst we could have been. They went back out there in the second round with something to prove. I’m proud of them.”

The Red Devils combined to shoot 10-under the second day.

Brentwood’s Trenton Johnson, the defending champion, struggled to a 75-78-153.

Ryan Hall was solid and consistent. In the first round, he was 3-under on both the front nine and back nine. The second day saw him go -3 and -4. He had only one bogey in the tourney, a 5 on hole No. 6 the opening day.