Halls cheerleaders are ‘thankful’ to get to finish the season

By design on February 14, 2021Comments Off on Halls cheerleaders are ‘thankful’ to get to finish the season 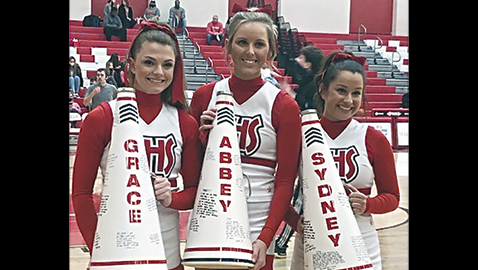 It’s been a “rough season” for Halls High School’s cheerleaders, but it is ending on a positive note.

Changes made by Governor Bill Lee and the Knox County School system late in the basketball regular season allowed Cheer and Dance teams to participate and their parents or guardians, grandparents and household members also to attend.

Halls, however, won’t be competing as usual in the TSSAA State Championships for Cheer teams this year, which will be conducted in a “virtual” format due to the pandemic and COVID-19 concerns.

“Unfortunately no (we can’t),” said Halls Cheer Coach Cheri Duncan on Feb. 2. “We just found out about it, so we won’t have time to practice. Many of my girls have already started spring sports while we were benched from cheering.

“They have had a rough season but are a great group of girls!”

Cheer and Dance teams, however, received good news about a week later, and on Feb. 10, Coach Duncan and her squad acknowledged the changes that had been made by the Tennessee governor and KCS and what getting to cheer again meant to them.

Senior Abbey Hopkins said: “It has been amazing getting the opportunity to cheer again and finish out the season with my best friends! I’m so thankful that we got the chance to cheer again!”

Sydney Hollingsworth, a senior, also appreciated the opportunity to cheer again and added: “I’m so thankful for everyone that fought for us. We appreciate everyone so much!”

And senior Grace Lawson agreed, adding: “It has been so fun and has made me appreciate it so much more.”

Coach Duncan was very excited to see her cheerleaders on the sidelines again.

“We would like to thank all those people who emailed, called and signed petitions for us. We would especially like to thank our State Representative Michelle Carringer for fighting on our behalf.”

Halls cheerleaders are ‘thankful’ to get to finish the season added by design on February 14, 2021
View all posts by design →