By design on January 31, 2016Comments Off on Halls routs Farragut and claims league title 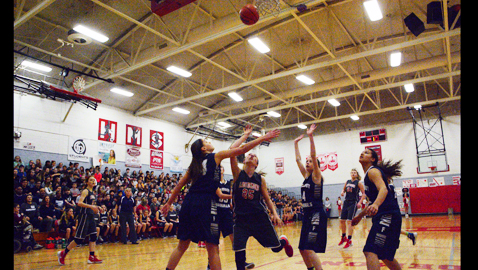 The Lady Demons nailed down the title with victories on Wednesday and Thursday at home and they’ll be the top seed in the upcoming James A. Ivey Jr. Memorial Middle School Basketball Tournament.

Halls will have a first-round bye when the tourney opens on Thursday. The Lady Demons (12-1 in league play) will play their first tournament game on Saturday, Feb. 6 at Karns Middle School.

Halls clinched the league title with a 43-25 win over South-Doyle Thursday. That victory came on the heels of the Lady Demons’ 43-19 win over Farragut. The Lady Admirals entered that game with hopes of claiming the regular-season title but Halls wasted little time dashing Farragut’s aspirations.

“Coming in, both teams were 10-1 but we had a great game,” Halls coach Richard Lee said. “All five of our starters contributed.

“Bailey Trumm and Macy Kirby led us in scoring. This was just a total team effort for us against a very good Farragut team.”

The game was an early-afternoon tilt and was played in front of a packed house of Halls students.

“It was great to have all of our students here,” Lee said.

The Lady Demons had a 9-7 lead by first quarter’s end. They would go on to hold the Lady Admirals to just two points in the second frame and open a 30-9 halftime lead.

“We were playing really well in the first quarter,” Farragut coach Susan Davidson said. “Halls had a great game and they’re a great team.

“This was a tough atmosphere and we have some young middle school kids. This game was supposed to be played in December and it probably would’ve been better for us in December because we were playing really well then. We’ve been struggling lately.”

The Lady Admirals couldn’t contain Trumm. She scored a game-high 20 points and was perhaps the most consistent player on the floor. She had 10 points in each half and converted seven of her eight free throws over the final six minutes.

Kirby added 11 points for Halls, which kept Farragut’s inside duo of Bri Tookes and Lauren White in check, Tookes had just two points in the contest while White finished with six.

Neither player scored before halftime.

Madison Hodge led Farragut with seven points but she didn’t score over the final 12 minutes.