By design on April 8, 2018Comments Off on Hardin Valley has it going the Wright way in track and field 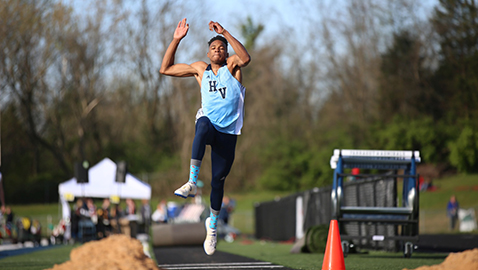 A little past the midway point of the high school track and field season, Willington Wright of Hardin Valley Academy appears to be competing like he’s on a mission.

The Hawks’ senior was No. 1 in the state in three different events as of Friday, April 6, according to the Tennessee Runner MileSplit Outdoor Rankings.

All three performances rank No. 1 from Memphis to the Tri-Cities of upper East Tennessee.

Wright has company on the list too from other Knox County athletes.

Bearden senior Joshua Sobota ranked No. 1 in the shot put event with a heave of 61 feet at the South Knoxville Classic last week.

“Willington is the brother of our guy (Weldon Wright) that won state in triple jump and long jump a few years ago,” said Hardin Valley Coach Bryan Brown.

“Our 4×400 relay actually ran without Will (at Farragut Invitational), but with him on there, we finished sixth in the national indoor meet.”

Wright had a good year as a junior in 2017, but he has made a lot of progress in his times and distances since then.

With Wright already having run faster than that in the 400 this season, he could be going after some gold at the Spring Fling in Murfreesboro next month.

“I am going to run my first race of the season at the Ben Martin Invitational (April 6),” she said. “I will be running at KIL next month. My coach is still deciding what other races I will be running this season.”

COMING UP: Two of the regular season’s biggest high school track and field events are around the corner, with the Volunteer Track Classic slated for April 20-21 at UT’s Tom Black Track and the annual KIL meet April 30 and May 1 at Hardin Valley Academy.

Hardin Valley has it going the Wright way in track and field added by design on April 8, 2018
View all posts by design →