Hardin Valley is working on a volleyball masterpiece

By design on September 17, 2017Comments Off on Hardin Valley is working on a volleyball masterpiece

PHOTO BY BY LUTHER SIMMONS Hardin Valley's Mandy Prescott makes a play at the net in the Lady Hawks' second win of the season over rival Farragut. 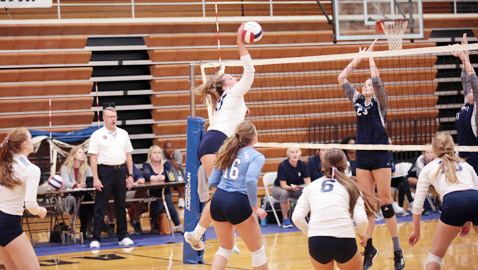 And for Coach McCurry and her players, what would be prettier than a picture of the Lady Hawks hoisting the Class AAA state championship trophy at the TSSAA tournament in October?

Just close your eyes and imagine that. Maybe Mitzi has.

“Graduating six people, we had to figure out the new roles everyone would take,” said McCurry, recalling the start of the 2017 season. “It’s like working a puzzle, putting all the right pieces together in the right places to make a pretty picture.”

Since Coach McCurry opened the box and poured out the pieces over the table, her Lady Hawks have put together a 26-6 overall record, including a 5-0 worksheet for first place in District 3-AAA.

They beat rival and perennial state power Farragut for the first time in years and then did it again on the Lady Admirals’ home court last week, 25-18, 25-20 and 25-21.

“We’ve had a strong start to our season and we are continually progressing in hopes to finish even stronger than we did last year as we meet the top teams in the state,” said senior Isabella Mitchell.

Hardin Valley made its first trip to state last year and finished third. The Hawks defeated Ravenwood and Siegel, and then fell to Brentwood and Farragut in the losers’ bracket finals. The Lady Admirals went on to finish as state runners-up for the third year in a row.

“I hope that we can be competitive through the third week of October (state tournament),” said McCurry, who is in her third season as head coach. “We must stay focused on team and not individuality as well as our fundamentals.”

The Lady Hawks will take the court again Tuesday, hosting Lenoir City in their final regular season district match. The District 3-AAA tournament will be played at Lenoir City and South-Doyle Oct. 2 through Oct. 5.

“The strength of the team is that we are very balanced throughout with good hitters, setters and defense,” said McCurry. “We have four seniors (Jericka Emert, Alex Kirby, Mandy Prescott and Mitchell) that are being great leaders as well as playing with determination and purpose.”

“We are still working on building a program rich with tradition and developing a culture of respect under adverse circumstances,” added Coach McCurry. “This year’s team is proving true to those winning qualities of volleyball and life.”

McCurry said it takes time to establish a history of winning. “Confidence in one’s self and their teammates needs to be nurtured and encouraged.

“I am very proud of all the Lady Hawks volleyball teams … our first-ever freshmen team, our junior varsity team winning the first Sunsphere tournament and our varsity for competing with some of the best teams in the nation.”

The weekend before its latest win over Farragut, Hardin Valley lost matches to Notre Dame Academy of Toledo and Lambert of Suwanee, Ga.

“Even through adversity, we have been able to come together,” said Prescott, the team captain. “Though we may lose focus and we can fall back during games, our team has an extremely solid base and we have been able to prove ourselves by coming back time and time again.”

The puzzle Coach McCurry and her girls have been putting together since back in August is taking shape, but there is still work to do and more pieces to put in place.

Hardin Valley is working on a volleyball masterpiece added by design on September 17, 2017
View all posts by design →