By design on April 3, 2016Comments Off on Harmony and Hymns by the TOTS 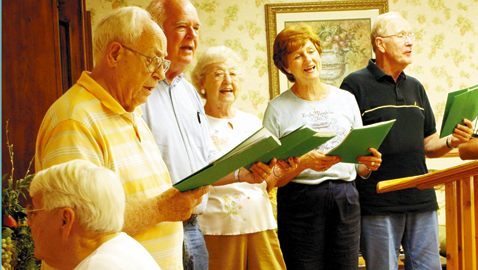 You may be one of the Focus readers who has been privileged to hear them sing in one of the more than 175 churches or assisted living facilities over the years.  I have always known them as “The TOTS,” an acronym for “The Old Time Singers,”— though they have playfully said it stands for “too old to sing!”  I had no idea how or when they were organized as The TOTS, but an outstanding couple who became a part of the group gave me some insight.  I was fascinated to learn from Walter and Margie Maples how the talented group started and evolved into the “TOTS” that so many have enjoyed hearing.

In 1998, several members of the late Charlie Hatchett’s Sunday School department at Wallace Memorial Baptist Church decided to form a gospel singing group.  They called themselves “Charlie’s Angels.”  It was a rather unusual troupe.  The group included the late Mrs. Beryl Davis who sang tenor; Margie Maples, alto; and the late Roger Lockhart and Walter Maples both sang bass.  Mrs. Betty Lockhart, Roger’s wife and an accomplished keyboard accompanist who had previously played for professional gospel quartets, provided accompaniment for the group.  The “Angels” sang for their department and others until Betty’s diabetic condition worsened, and she was forced to give up playing the piano.  All the while, Betty had been undergoing dialysis.  When she passed away in 2000, the group disbanded.

Later, Howard and Joyce Clark joined the church family.  After choir rehearsal at Wallace one night, Walter approached Howard about singing tenor in a senior quartet he was getting together.  The Chattanooga native brought years of musical experience from his early days in choirs at Red Bank Baptist Church, Red Bank High School, and Carson-Newman College to his years of leading choirs and congregational music in churches in Tennessee, Texas, Michigan, and Spain.  After graduation from Southwestern Baptist Theological Seminary in 1961, Clark pastored two churches in Michigan for over twenty years in home missions.  God called him and his wife, Joyce, a pianist and organist, to international missions in 1982 with the International Mission Board (IMB) where he pastored two churches in Spain for sixteen years before retiring to Knoxville, Tennessee.  “Our musical experiences were used many times as part of our missionary ministry,” Clark said.

The inspirational story behind this talented and dedicated group full of harmony and hymns will be continued.

Educator Appreciation Week:  Local children’s book authors Wayne and Ralphine Major will be at Barnes & Noble Booksellers, 8029 Kingston Pike, Knoxville, Tennessee, on Saturday, April 9, from 9 a.m. – 2 p.m. for a book signing of “Piddle Diddle’s Lost Hat.”  Piddle Diddle will be in full costume for picture making.  Bring your camera!  It promises to be a fun day!

Harmony and Hymns by the TOTS added by design on April 3, 2016
View all posts by design →