‘He was just being Gene’

By design on January 3, 2021Comments Off on ‘He was just being Gene’ 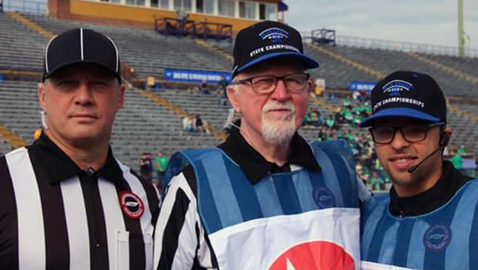 On a snowy Christmas Eve night in Halls, Gene Mynatt, a longtime TSSAA official in multiple sports, left this world doing what he liked to do best – and that was helping someone.

His assistance this time found Mynatt, 74, walking alongside East Emory Road on his way to meet his youngest daughter, Ashley, and help her get back home.

Around 7 o’clock that night, a UPS truck was turned over on its side and traffic was backed up when Ashley called her father to ask what she should do.

Mynatt, at home not too far away, advised her to find a place to pull over and park and he would come to get her and they could walk back together. He even took a pair of his wife’s boots and a jacket for her to wear.

Ashley had been living with her mom and dad at their condo in Halls the last two or three years mainly because her parents had dealt with some health issues and she works in health care.

Gene never made it to Ashley. He was struck by a hit-and-run driver.

“Apparently, somebody was impatient obviously and pulled around the traffic that was stopped,” said Shane Mynatt, Gene’s son, last week. “He was … hit from behind.

“Fortunately, there was a gentleman, Clint, right behind that vehicle and saw it. He went over to where Dad was.”

Clint talked briefly to Gene and advised him not to get up until medical personnel arrived, according to Shane. Clint also found Gene’s cell phone and talked to Gene’s wife, Patsy. He went and got Patsy and then picked up Ashley and took them to Tennova North Medical Center, where Gene later passed away from the injuries he had suffered.

“Dad was always a servant and would do anything anybody needed,” said Shane. “And so he left this world, just serving my sister, walking down there to go help her get home.”

As of Wednesday (Dec. 30), the person who drove off had yet to be found. The Tennessee Highway Patrol is involved in the investigation.

“We’re not mad,” said Shane. “Nobody’s looking for justice here … But we just wish they would come forward and we could have some closure. I just don’t want my mom for the next year or two, as she drives around in Halls, to wonder is that the truck that hit Gene?”

Mynatt loved serving as a deacon at CrossPoint Church.

“For us, knowing that dad’s faith was in Jesus, and how we believe from a spiritual perspective that he’s in Heaven, and because we have a faith in Jesus, we’ll get to see him again one day,” said Shane.

Patsy and Gene had their 55th wedding anniversary in November.

He was with the TSSAA for over 35 years, officiating football, basketball and softball. He worked two state tournaments in softball and would have worked his third, but the 2020 tourney was cancelled due to the pandemic.

Mynatt came off the football field as a referee at the end of the 2019 season. That year his crew included Shane at umpire and grandson Jared Mynatt at back judge.

Gene also had been the assigning officer and a supervisor in the Knoxville Football Officials Association the past two seasons.

Mynatt was an excellent bowler and had posted two 300 games within the past five years.

“He was a heck of a card player,” said Shane. “He could shoot pool like a pool shark. And if he got on a roll at a bowling alley, buddy it was lookout, because he’s just gonna keep pouring it to you.”

Mynatt graduated from Harrison-Chilhowee Baptist Academy and served in the Navy. He was to have received full military honors at his service on Saturday (Jan. 2).

“I appreciate, even in his death, some of the honors that are being bestowed upon my dad,” said Shane.

“He really just did what he did, even serving and leading, he just did it in a real simple and ordinary way. He didn’t look for any recognition; he just kind of did it.”

Even on a snowy Christmas Eve night in Halls, added Shane, “He was just being Gene, and that’s really all it was.”