By design on August 9, 2020Comments Off on HVA and Catholic’s Riley Smith eye state titles 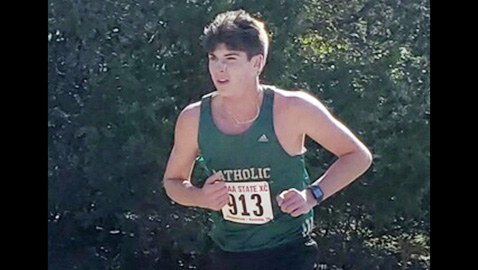 For several years, the Knoxville area has been strong in cross country, even with runners standing out on the national and international scene.

This year could again produce some championships on the state level.

Heading into the boys’ cross country season, Hardin Valley has to be the favorite for the Division I Large Schools state crown as Coach Bryan Brown’s team, which placed fifth in 2019, returns its top five runners and six of the seven who competed at Percy Warner Park in Nashville last November.

Siegel, which captured the state title, has only one of its top five returners back. Runner-up Bartlett returns three, third place Central Magnet three and fourth place Brentwood four.

Hardin Valley also could be on the verge of putting together back-to-back state crowns as it enters this season with a junior dominated team.

Trevor Coggin of Farragut made a strong showing at the state as a freshman last fall, placing 34th with a time of 16:49.27, so it will be interesting to see how he progresses as a sophomore.

Other runners in Division I Large Schools who ran under 18 minutes at the state meet and return are Farragut’s Liam Allison, Tyler Ebbert and Riley Hanson and West’s Zach Lagan.

Knoxville Catholic senior Riley Smith, who competes in the Division II Large Schools division, appears to have the best shot at a state individual championship among local harriers this season. He placed sixth last year with a time of 16:57.53. The only runner finishing ahead of him that returns is Cayden Durrough of Brentwood Academy, who was clocked in 16:53.97 and placed third.

“Based on last year’s results, I believe that Riley should definitely be in the mix to win a state title this year,” said Catholic Coach Sean O’Neil. “He had a bad ankle sprain last winter, but he has worked hard to come back from it. He put in a lot of work over the summer, and he is starting the season well ahead of where he was this time last year.”

Seth Jinks of L&N STEM Academy was state champion in the Division I Small Schools division as a senior last year. Senior Evan Carr, 13th last season, is expected to carry the Gryphons’ banner at the state this year.

Dwayne Morris returns for Austin-East after leading the Roadrunners to eighth place at the state last season.

In Division II Small Schools, Webb returns its top three harriers, including Kaden Narayani, who placed ninth at the state, along with Billy Robinson and Cooper Wood.