By design on March 7, 2021Comments Off on It wasn’t pretty, but Lady Bulldogs claim region title 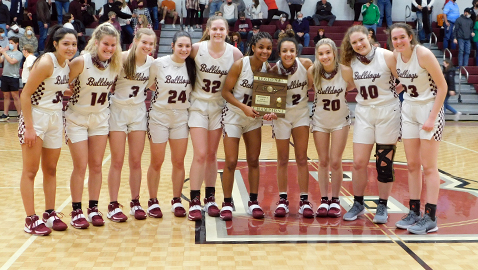 And Renayah McLaughlin offset her free throw shooting in the fourth quarter in so many ways.

That and a whole lot more added up to a 57-51 win over Maryville in the Region 2-AAA girls basketball tournament title game last week at the Dawg House.

For Coach Justin Underwood, it was his third region championship in his 10 seasons at BHS and the Lady Bulldogs’ fourth straight win over their Blount County rivals this season.

Bearden (29-1) was scheduled to host Johnson City Science Hill (20-11) this past Saturday night in the State Sectional round with a trip to this week’s TSSAA state tournament on the line.

Sullivan, a junior wing, ended up with a game-high 21 points and five 3-point baskets. She also made some outstanding assists, with a lob to sophomore post Avery Treadwell followed by a nifty pass to junior guard Emily Gonzalez to give Bearden a 10-point lead (35-25) in the third period.

“Resilience,” said Coach Underwood may have been a key to the win, but he felt his team’s defensive play was also big. He was proud of his players for holding a good offensive team like Maryville to 51 points.

“They hit a bunch of threes,” he said, “but still I thought we did a pretty good job and at the end of the day it doesn’t always have to be pretty.”

Maryville Coach Scott West felt McLaughlin was the difference in the game.

Three-point shooting put Maryville back in the game but it was off target in the closing minute when it was still a one-possession contest.

McLaughlin, who would make only two of eight free throws in the final period, scored down low in the lane to give Bearden an 11-point lead (44-33) early in the fourth.

Maryville chopped the lead down to three (44-41) but the Lady Bulldogs built it back to nine on a 3-point shot by Sullivan and McLaughlin’s three points the old fashion way.

Maryville made one last run and pulled within three again (54-51) when Fritz, a Class AAA Miss Basketball finalist, hustled down the lane to grab her own missed shot and scored with 49.5 seconds to go.

After a timeout by the Lady Rebels, McLaughlin was fouled and missed both ends of her double bonus.

With a chance to tie, Midkiff’s 3-point attempt from right wing missed.

Gonzalez grabbed a rebound and hit one of two free throws to give Bearden a 55-51 lead with 11.2 seconds remaining.

Maryville missed a 3-pointer from the right corner and Sullivan added two foul shots with 3.9 seconds left for the final margin.

“Oh gosh,” uttered McLaughlin when the team’s free throw totals (8 of 21) were mentioned after the game. “I think, honestly, it was just an off day for the whole team. Usually we aim for and make 70 to 75 percent. We’re definitely going to be in the gym tomorrow shooting free throws for sure.”

It wasn’t pretty, but Lady Bulldogs claim region title added by design on March 7, 2021
View all posts by design →