By design on September 7, 2020Comments Off on Jay and Schoonmaker named chair and vice chair of Knox Commission 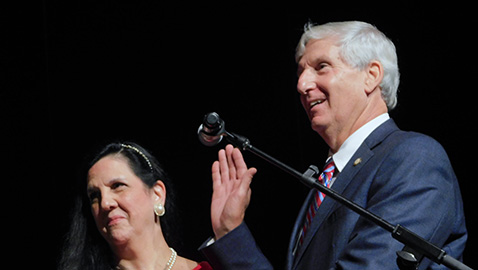 Knox County’s rural commissioners and the two new Democrats on the body came together Tuesday during the reorganization special session to elect Commissioner Larsen Jay as the new chairman.

Chairman Jay said it will be difficult “filling the big shoes” of outgoing Chairman Hugh Nystrom, who chose not to seek re-election.

Following Jay’s election as chair he took the seat and called for nominations for vice chair.

District 2 Commissioner Durrett nominated Schoonmaker; Jay nominated Dailey; and Lundy nominated Smith. Smith pulled out in favor of Schoonmaker, who went on to receive seven votes with Jay and Dailey voting for Dailey and Busler and Beeler passing. Dailey and Jay then joined in supporting Schoonmaker, giving him nine votes.

The commission, with direction from newly elected Knox County Law Director David Buuck, then proceeded to fill in all the vacancies in various county committees.

Other assignments included Biggs to the Development Corporation, Ward to the Investment Committee, and Schoonmaker and Beeler to the Audit Committee. Dailey will serve on the UT Arena Use Committee, Jay on the Agricultural Committee, Beeler on the Public Records Commission, Durrett on the Insurance Benefits Committee and Kyle Ward on the Three Ridges Golf Board.

Additional committee and commission positions may be assigned in the new commission’s first full meeting or work session this month.

Commissioner Smith suggested a “mock meeting” of the commission for returning and new members and the idea was also applauded by Chairman Jay.

“The new chair would enjoy that also” Jay said.

Jay and Schoonmaker named chair and vice chair of Knox Commission added by design on September 7, 2020
View all posts by design →