By design on April 10, 2016Comments Off on ‘Just playing together’ is key to Powell’s big week in softball 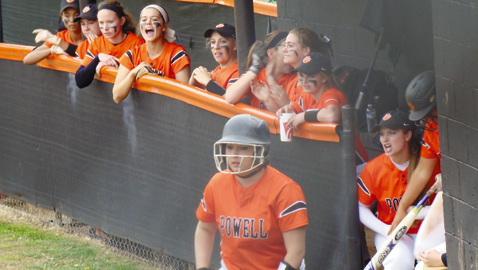 Powell High head softball coach Jeff Inman said it had been a “hard week” with all the games his team had played.

Some also might have called it an eye-opening week as Inman’s young Lady Panthers moved to the top of District 3-AAA.

Freshman standout Allison Farr hurled a two-hitter and struck out 11 as Powell remained unbeaten in the district with a 2-1 win over visiting Halls Wednesday night.

That victory came after Powell made a significant statement two days earlier on its home field by nipping perennial state power Gibbs 5-4 in nine innings.

Add a 13-4 win over Anderson County on Tuesday and a 20-1 thumping of Oak Ridge on Thursday and the Lady Panthers headed into a well-deserved weekend off at 9-0 in district play and 19-2 overall.

“We’ve had a long week,” said Inman following the April 6 win over Halls. “We played eight games in Kingsport over the weekend and probably 15 or 16 games without a day off in about a week’s time. It’s been a hard week. We were worried about them being a little tired coming into the week.

“We didn’t play our best Monday (against Gibbs) but we played well enough to win.”

In that game, Kennedy Cowden came through with a two-out, solo homer in the bottom of the seventh to tie the score 4-4. Powell won it in the ninth when Ashley Harbison doubled, McKenzie Lamb bunted her to third and Marieve Elkins singled her in for the winning run.

“I absolutely love this team,” said Lexi Jones, one of only two seniors for Powell and a starting catcher for the fourth year. “We have so much heart. We give it our all every single time and we all love each other. If somebody is down, we pick each other up. This is my favorite year that I’ve played and it’s my senior year, and I wouldn’t trade any of these girls for the world.”

Jones, the Lady Panthers’ clean-up hitter, gave her team a 1-0 lead in the third inning against Halls when she singled to left field off Kim Blair to drive in Cowden.

The bottom of Powell’s batting order produced the second run with two outs in the fourth as No. 9 hitter Karsten Miller doubled just out of leftfielder Beth Karnes’ reach to plate Lamb, who had singled.

“It doesn’t matter where you’re at in the lineup,” said Jones. “It doesn’t matter if you’re No. 1 or No. 9. We just want you to go out there and give your best. And she (Karsten) did a great job tonight driving in that run.”

Starting in the second inning and continuing through the sixth, Farr retired 14 Halls batters in a row and was working on a no-hitter heading into the top of the seventh.

McKinley Snyder sparked the Lady Red Devils with a single to center. With one out, she moved to second on a dribbler back to the mound. A single to center by Lauren White put runners on the corners.

Mayci Mason was put into the game to run for White and when she stole second, Snyder raced home from third to cut Powell’s lead to one. Farr, however, struck out Taylor Gilley to end the game.

The key to the two big wins over Gibbs and Halls, summed up Jones, was “just playing together.”

As for Farr’s performance, Inman said, “It was awesome. After the long week and a half of play, she’s battled a little bit of a sore back, but she threw the ball really well tonight.”

Allison is a special freshman.

“You get one every now and then,” said Inman. “She’s definitely a good one.”

The fourth-year Powell coach likes many things about this team, including its competitiveness, but feels “team chemistry” tops the Lady Panthers’ strengths.

“We’re a good hitting club,” he said. “We can play pretty good defense and we’ve got pretty good starting pitching.”

The team’s other senior, Chelsey Fortner, pitched the win over Anderson County.

Inman isn’t concerned about being unbeaten now, he just wants his team “to be there at the end.

“But it’s not just Halls, Gibbs and us. Karns is better, Anderson County is better. The district has improved as far as the quality of teams that’s in the district. You go out any day and have an off day, and you’re liable to get beat.”

Powell is scheduled to return to action Tuesday at 5:30 at home against Karns. The Lady Panthers will travel to Corryton for a rematch with Gibbs on Wednesday.

‘Just playing together’ is key to Powell’s big week in softball added by design on April 10, 2016
View all posts by design →