By design on July 8, 2012Comments Off on Karns LL teams are battling for state berth 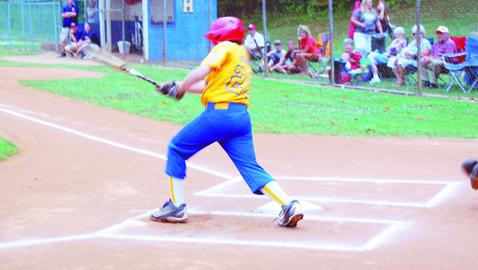 Karns is hosting the District 6 Little League baseball tournament this week. Six teams are in the tourney, which is the first step to Williamsport, Pa., and the nationally televised summer classic.

Karns has two teams in the all-star tourney for 11 and 12-year-olds, joining a team each from Union County, Maryville, New Tazewell and Grainger County.

“We applied for a wavier through Little League headquarters this year and they approved it for us to have two teams,” said Jason Garrett, president of the Karns LL program. “We have two very competitive teams in this age group this season.”

The championship game in the double-elimination tourney is tentatively scheduled for Wednesday night at 7. The District 6 champion will earn a berth in the state tournament at Murfreesboro, which starts July 21. Karns hosted the state event last summer.

Despite a long dry spell and record heat recently in the Knoxville area, stormy conditions delayed the start of district play last week.

The district for 10 and 11-year-olds, also held at Karns, was delayed for 2 ½ hours last Monday before Karns put an 18-2 win over Maryville in the books around 11:45 p.m. Maryville came back to edge Karns 2-1 on Tuesday to set up a Saturday afternoon finale in the best two-of-three series playoff.

Heavy rain and wind stopped played quickly on Thursday night as the 11 and 12-year-olds’ district began. Karns Blue jumped out to a 3-0 lead against Union County in the top of the first inning before the game was called.

“Brian Bell hit a ball that started out at the back of second base but ended up in front of the mound because of the wind,” said Garrett.

Ryan Medders got in his at-bat, belting a double to drive in two runs, but play was halted for good moments later. Ryder Green had led off the inning with a single and Trevor Adams followed with another single. But the productive inning ended up a washout, as Little League rules require a full first inning to be played or the game must be started over, said Garrett.

Jim Bell is head coach of the Karns Blue team and is assisted by Garrett. They coached Karns to back-to-back district titles and state runner-up finishes the past two years in the 9-10 and 10-11 age groups.

Woody Culp is head coach of Karns’ Gold team and Mark Miles is the assistant. Karns Gold was to play New Tazewell in its district opener.

The Karns ball park is located on Oak Ridge Highway next to the Karns Community swimming pool.

Karns LL teams are battling for state berth added by design on July 8, 2012
View all posts by design →