By design on November 19, 2017Comments Off on Knox Catholic beats Oak Ridge, stands one step away from state title game 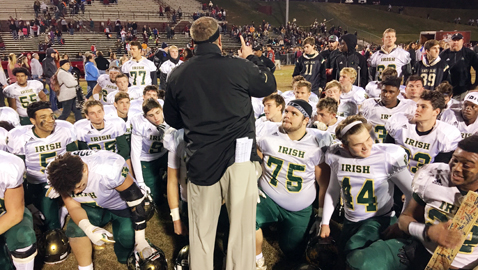 For the first time ever, Knoxville Catholic faced Oak Ridge in a football game, and the stakes were pretty high.  The winner would advance to the state semifinals in Class 5A.

The Irish offense was sloppy at times, but they mixed the run and the pass efficiently on their way to a 37-28 victory at historic Blankenship Field on Friday, November 17th.

“At this time of year you try to win and advance.  Obviously you want to play perfect but we were far from that tonight,” said Knoxville Catholic head coach Steve Matthews.  “It’s been a long time since we have been in a close game, been several weeks… so this was a good thing for us.   But hats off to Oak Ridge.  They played outstanding and played us to the very end.”

The opening stanza couldn’t have been scripted any better for the Irish.  A long kickoff return from D.J. Mitchell gave Catholic the football at the Wildcats 15.  Facing 4th and 3 from the 7, the Irish went for it, and were rewarded when quarterback Jack Sompayrac kept the football and scampered in for the score.

It looked like the Wildcats would hold the Irish to a short field goal attempt.  But an offsides flag moved the football to the 3, and allowed Matthews to change his mind.  They went for it on fourth down.  Joshua Brown powered his way over the goal line, and Catholic was on top 14-0.  Brown rushed for 63 yards against the Wildcats.

This was a chippy game at times, and nowhere was this more evident than in the trenches.

“I came into this game banged up so I know they were targeting me,” said Knoxville Catholic senior offensive lineman Cade Mays. “They load the box every play… cut me every play. But if you want to get down and dirty? Let’s do it. Let’s do it.”

In the third quarter, with the Irish on top 14-6, the Irish went on a 53 yard touchdown march.  One of the big plays was an 18 yard pass from Sompayrac to Cameron Blakely on 3rd and 13.  Joe Fluker finished the drive with a 10 yard touchdown run, and it was 21-6.

A Mitchell interception once again put Catholic (10-3) on a short field.  Starting at the Oak Ridge 34, the Irish actually went backwards for a yard.  But on 4th down and 11 from the 35, Sompayrac went for it all.  A deep ball for Blakely, who made the catch despite being double covered in the end zone.

Three Catholic touchdowns happened on this night when they gambled on fourth down.

“We are an aggressive team on fourth down… we feel like we have a shot at it,” said Matthews. “We trust our quarterback and trust what we are doing on offense and tonight we were able to make some plays.”

“We practice that every Thursday.  The key is do you trust your linemen to go cover, and that’s always scary,” Matthews said with a smile. “But it was a great kick and the guys did a great job downing it inside the 1.  I thought that was a huge play that really turned the momentum.”

A few plays later the Wildcats were flagged for holding in the end zone, giving Catholic a safety, and it was 30-20.

A 27 yard touchdown pass from Sompayrac to Dashon Bussell with 2:30 left put the game out of reach.  Sompayrac had 177 passing yards and two touchdowns through the air on the night.

Next up, it’s a date with Central, with a trip to Cookeville at stake.  The week ahead is a special one for the Irish, with a chance to practice on Thanksgiving Day.

“I’ve been lucky in the last 6 years this is my fourth (Thanksgiving Day practice). The players love it. We will hang out on Thanksgiving and they go and spend time with their families.  But it means you are one of the top 4 teams in Class 5A.”

“I love my team. I love my brothers. We are closer now than we have ever been,” said Mays. “This is my fourth year with most of them, and I want to go out with that ring, and we won’t settle for anything less.”

Knox Catholic beats Oak Ridge, stands one step away from state title game added by design on November 19, 2017
View all posts by design →