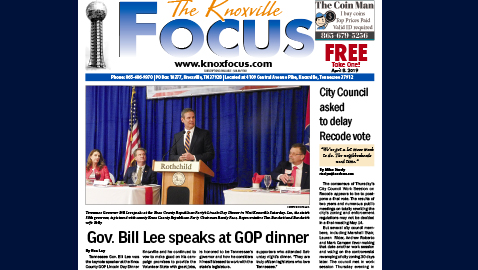 Lee, Tennessee’s 50th governor, spoke briefly at the annual fundraiser at the Rothchild Catering and Conference Center. This was his second speech in Knoxville and he continued to vow to make good on his campaign promises to provide the Volunteer State with great jobs, schools and neighborhoods.

Lee, who gave the State of East Tennessee Address at the University of Tennessee’s Clarence Brown Theatre in March, again remarked that he is honored to be Tennessee’s governor and how he considers himself blessed to work with the state’s legislature.

“I had a perspective about how it was going to be to work with the legislators in Tennessee and now that I’ve gotten to work with them, I am extremely honored,” Lee said to his many supporters who attended Saturday night’s dinner. “They are truly citizen legislators who love Tennessee.”

The governor promoted his Educational Savings Accounts, which strive to give students in failing schools the opportunity to transfer within the state’s public school system.

School choice is an issue close to Lee’s heart, although his stance drew the ire of protesters outside the Rothchild Center.

“Those people [the protestors] are people who disagree with me but every child, regardless of their neighborhood or their zip code, deserves a quality education,” Lee said. “I’ve asked legislators, who are against me on this, if they would leave their child who is zoned to a failing school, if they wouldn’t get them out.

“I mentored a young man in a failing school for five years and only five percent of his senior class was going to graduate. He was able to get out of that failing school and go on to college.”

The governor also hammered home his belief in the importance of technical education, while citing his business experience in the private sector. His company now employs 1,200 people, many of whom are electricians or tradespeople in other technical industries.

Lee also restated his stance on being tough on crime but more compassionate on non-violent offenders who will someday re-enter society.

“I worked in a prison ministry for years and you have faith-based programs to help prisoners re-enter society,” Lee said. “We have people in our prison system and 95 percent of them will re-enter society. If we help them to re-enter society, there will be one less crime, one less victim and $38,000 a year of taxpayers’ money that won’t be spent on an incarceration.”

While pledging to be compassionate on rehabilitated criminals, Lee also promised to be tough on drug dealers and violent criminals.

“You can be both tough and smart on crime,” he said. “Punishment on drug dealers, violent criminals and those who threaten our citizens in Tennessee must be swift and severe.”

Like fellow Republicans, Lee believes in limited government and on Saturday, he noted that it’s the people of Tennessee who make the state great.

“God has put me in a great spot but I must acknowledge the past leadership of our state, the Republican and conservative leadership of this state.