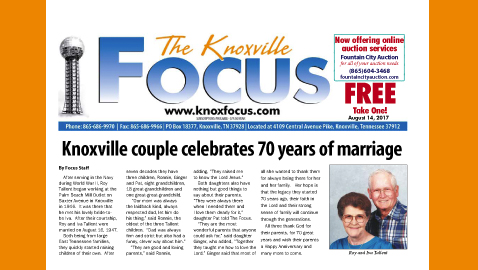 After serving in the Navy during World War II, Roy Tallent began working at the Palm Beach Mill Outlet on Baxter Avenue in Knoxville in 1946.  It was there that he met his lovely bride-to-be Iva.  After their courtship, Roy and Iva Tallent were married on August 16, 1947.

Both being from large East Tennessee families, they quickly started raising children of their own.  After seven decades they have three children, Ronnie, Ginger and Pat, eight grandchildren, 18 great-grandchildren and one great-great-grandchild.

“Our mom was always the laidback kind, always respected dad, let him do his thing,” said Ronnie, the oldest of the three Tallent children.  “Dad was always firm and strict but also had a funny, clever way about him.”

“They are good and loving parents,” said Ronnie, adding, “They raised me to know the Lord Jesus.”

Both daughters also have nothing but good things to say about their parents. “They were always there when I needed them and I love them dearly for it,” daughter Pat told The Focus.

“They are the most wonderful parents that anyone could ask for,” said daughter Ginger, who added, “Together they taught me how to love the Lord.” Ginger said that most of all she wanted to thank them for always being there for her and her family.   Her hope is that the legacy they started 70 years ago, their faith in the Lord and their strong sense of family will continue through the generations.

All three thank God for their parents, for 70 great years and wish their parents a Happy Anniversary and many more to come.