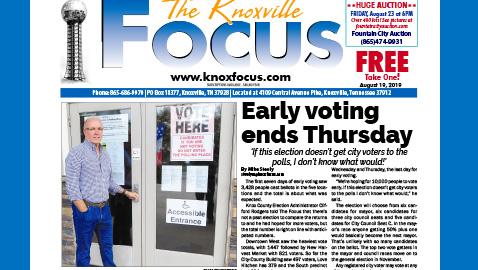 The first seven days of early voting saw 3,428 people cast ballots in the five locations and the total is about what was expected.

Knox County Election Administrator Clifford Rodgers told The Focus that there’s not a past election to compare the returns to and he had hoped for more voters, but the total number is right on line with anticipated numbers.

Downtown West saw the heaviest vote totals, with 1447 followed by New Harvest Market with 821 voters. So far the City-County Building saw 497 voters, Love Kitchen has 379 and the South precinct had 284 people vote.

“We’re hoping for 10,000 people to vote early. If this election doesn’t get city voters to the polls I don’t know what would,” he said.

Any registered city voter may vote at any of the early voting locations.