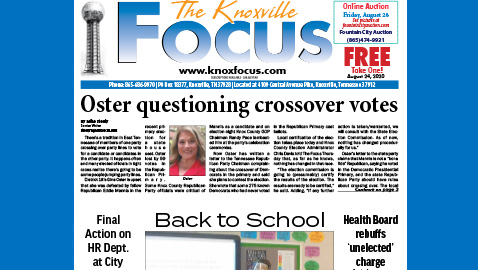 By Mike Steely
Senior Writer
steelym@knoxfocus.com
There’s a tradition in East Tennessee of members of one party crossing over party lines to vote for a candidate or candidates in the other party. It happens often and many elected officials in tight races realize there’s going to be some people jumping party lines.
District 18’s Gina Oster is upset that she was defeated by fellow Republican Eddie Mannis in the recent primary election for a state house seat. Oster lost by 99 votes in the Republican Primary. Some Knox County Republican Party officials were critical of Mannis as a candidate and on election night Knox County GOP Chairman Randy Pace lambasted him at the party’s celebration ceremonies.
Now Oster has written a letter to the Tennessee Republican Party Chairman complaining about the crossover of Democrats in the primary and said she plans to contest the election. She wrote that some 275 known Democrats who had never voted in the Republican Primary cast ballots.
Local certification of the election takes place today and Knox County Election Administrator Chris Davis told The Focus Thursday that, as far as he knows, nothing has changed in that race.
“The election commission is going to (presumably) certify the results of the election. The results are ready to be certified,” he said. Adding, “If any further action is taken/warranted, we will consult with the State Election Commission. As of now, nothing has changed procedurally for us.”
Oster’s letter to the state party claims that Mannis is not a “bona fide” Republican, saying he voted in the Democratic Presidential Primary, and the state Republican Party should have rules about crossing over. The local party apparently does and, prior to the election, appealed the Mannis candidacy with the state party only to find that three well-known Knox County Republicans vouched for Mannis, killing their effort.
State election law notes that “any bona fide member of an affiliated with the political party” is eligible to seek an office in a primary. But it goes on to say, “At the time the voter seeks to vote, the voter declares allegiance to the political party whose primary the voter seeks to vote and states that the voter intends to affiliate with that party.”
Tennessee is an “open primary” state and there is no party affiliation required. Voters are not “registered” Republican or Democrats. Each county has its own rules but state law always outrules those policies.
The Focus contacted the Tennessee Division of Elections and Julia Bruck, director of communications in the Office of the Tennessee Secretary of State, replied.
“To contest a primary election a complaint is filed with the political party holding the primary.  The political party has the authority to decide the contest and whether any violations occurred,” she said.