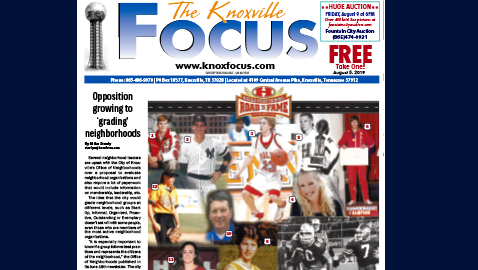 No telling how many thousands of boys and girls have participated in athletics at Halls High School since it was founded in 1916.

But there are 12 being announced today as the school’s very best of all time. They comprise the inaugural class of the “Halls High School Athletics – Road to Fame.”

Drum roll, please … or maybe it would be more appropriate to toot your horn, since this new sports pantheon chose to be called a Road to Fame instead of Hall of Fame like most others. And with one of the area’s oldest high schools being in Halls Crossroads, naming it Road to Fame was a natural fit, too.

“They are a cross section and a wonderful representation of the athletes that have performed at Halls down through the years,” said Jerry Julian, the president of the Halls High School Athletics – Road to Fame, Inc., which he started putting together last year.

The honorees will be introduced at Halls’ second home football game of the season on Sept. 6.

Approximately 35 were nominated for the first class. To be nominated an athlete must have competed for three years at Halls High. Their athletic accomplishments after high school also were taken into consideration in the selection process, along with integrity and sportsmanship, said Julian. The 12 honorees were chosen by a seven-member selection committee.

Half of them signed with the University of Tennessee and one played for the New York Yankees.

Here are a few of their accomplishments:

Tammy Eicholz Akard, an outstanding hitter in volleyball, was All-State and a KIL Player of the Year who signed a scholarship to Middle Tennessee State University.

Donnie Cooper sparkled in golf’s spotlight. He was All-KIL 1984-87 and a TSSAA state champion in 1987. At UT he lettered three seasons and was an Academic All-American.

Ashley Cox was a two-time KIL Player of the Year and All-State in girls basketball in the mid-1990s and signed with LMU, where she led the Gulf State Conference in 3-point accuracy as a junior.

Dean Craig, who attended Halls High from 1974-77, may have traveled the most unusual path on the Road to Fame. All-State in football and All-East Tennessee in baseball, he signed a football scholarship to Vanderbilt, but then chose instead to sign a pro baseball contract with the Los Angeles Dodgers.

Later, however, Craig went to the New York Yankees and played six years. But that’s not the end of it. He then signed a scholarship with Carson-Newman and played tight end on the 1984 NAIA national championship team.

Offensive guard Randy Hall led the way for a bruising ground game as the Red Devils went 15-0 and captured the Class AAA state championship in 1986. The UT signee was named to three different All-American teams and was Gatorade Player of the Year.

Jason Julian was a McDonald’s All-American tailback on the 1986 state title team and an excellent kicker who became Halls’ all-time scoring leader. The four-sport letterman also was voted Most Athletic in 1988. He went on to start at various positions at UT and was a member of two SEC championship teams.

James Ralph “Red” McMillan, who will be honored posthumously, was Lineman of the Year in Knoxville in 1957 and went on to play at Tennessee Tech, where he was a first-team All-OVC selection in 1961. He also was inducted into the Tennessee Tech Hall of Fame in 2011.

Missy Rutherford was Most Athletic at HHS in 1977 and an All-State sprinter. She signed with UT, where she lettered four years competing in the 200 and 400.

Russ Rutherford excelled in football and baseball at Halls in the late 1990s and went on to play college baseball at Walters State and the University of Kentucky.

Stephanie Humphrey Sayne was a two-time KIL Player of the Year, All-State three years and co-holds Halls’ school record for most strikeouts in a game. She continued her pitching career at UT and was an Academic All-SEC honoree two years.

Basketball was Cameron Sharp’s game and he was KIL Player of the Year and All-State in 2007. He finished his prep career with 1,980 points, 577 assists and 266 steals and earned a full scholarship to Carson-Newman University, where he was a member of the All-South Atlantic Conference freshman team.

Chris Vandergriff was a two-time TSSAA state wrestling champion and had a 27-2 record in 1977. A third-place finish in the SEC tournament highlighted the four-year letterman’s UT career. He went on to coach wrestling at Halls for 25 years, guiding the Red Devils to over 300 wins. The Greater Knoxville Sports Hall of Fame made him its first wrestling inductee in 2018.