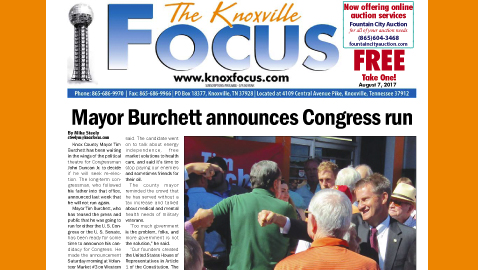 Knox County Mayor Tim Burchett has been waiting in the wings of the political theatre for Congressman John Duncan Jr. to decide if he will seek re-election. The long-term congressman, who followed his father into that office, announced last week that he will not run again.

Mayor Tim Burchett, who has teased the press and public that he was going to run for either the U. S. Congress or the U. S. Senate, has been ready for some time to announce his candidacy for Congress. He made the announcement Saturday morning at Volunteer Market #3 on Western Avenue.

“It’s time somebody put Americans and Tennesseans first. They’re sure not doing that in Washington,” Burchett told the large crowd made up by elected officials, veterans, and citizens.

“It’s time we bring our men and women home from the Middle East,” he said. The candidate went on to talk about energy independence, free market solutions to health care, and said it’s time to stop paying our enemies and sometimes friends for their oil.

The county mayor reminded the crowd that he has served without a tax increase and talked about medical and mental health needs of military veterans.

“Our founders created the United States House of Representatives in Article 1 of the Constitution. The house was created before the Senate. It was created to represent the people, the farmers, the laborers, the small business owners – people we call blue collar workers. People who in 2017 go to work every day with their names on their shirts,” Burchett told the supporters.

“There’s a reason House seats are on the ballot every two years, because these seats belong to the people, not to any one candidate or elected official. They belong to you. If you don’t like what’s happening in Washington you can do something about it before it’s too late,” he said.

“That’s why I’m standing before you here today—to officially announce my candidacy for United States Congress and I ask for your continued prayers and your support,” Burchett said.

Burchett said it’s time somebody stood up for our country instead of special interests and added, “They’re sure not doing that in Washington.”

His not-so-surprising candidacy makes him the leading candidate in what may become a large Republican field that could include Rev. Chris Edmonds of Maryville, Sheriff Jim Berrong of Blount County, State Representative Bill Dunn, and possibly State Senator Dr. Richard Briggs. Representative Jimmy Matlock of Lenoir City announced Thursday that he will seek the Republican nomination.

Dr. Joshua Williams, a psychologist, has announced himself a Democrat candidate for Duncan’s seat and Renee Hoyos, Director of the Tennessee Clean Water Network, may also seek that party’s nomination. A Democrat has not held the 2nd District seat in Congress since before the Civil War.

Burchett was born in 1964, the son of educators. He attended West Hills Elementary and Bearden Middle and High Schools. Burchett graduated from the University of Tennessee with a degree in Education and was elected, in 1994, to the Tennessee House where he served two terms. In 1999 he was elected to the State Senate and served three terms.

Burchett ran for Knox County Mayor and defeated Sheriff Tim Hutchison in the Republican Primary, going on to easily defeat a Democrat rival. He was easily re-elected and now faces a term limit for that office. A fiscally conservative Republican, Burchett is nevertheless friends with Knoxville’s Democratic mayor, Madeline Rogero, although he occasionally opposes her decisions.

The county mayor is married to Kelly Kimbell, and is noted for maintaining two terms without a property tax increase and also for the “Cash Mobs” he created to help draw attention to the loss of customers in South Knox County when the Henley Bridge was closed for repairs. More recently he again created a “Cash Mob” to help and honor the late Alvin Frye’s Fountain City Exxon.

A noted “tweeter” and fond of taking “selfies” of him with other people, Burchett has been traveling outside the county in recent weeks speaking to various groups without officially saying he’s in the race for congress.