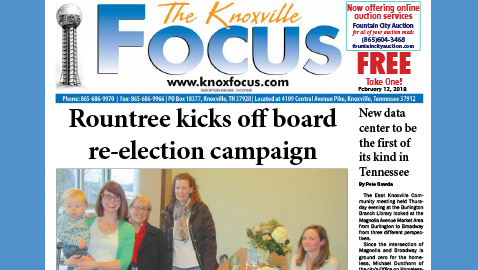 Rountree kicks off board re-election campaign

Rountree, who represents the 9th District and serves as the school board’s vice chair, played a vital role in hiring current Knox County Schools Superintendent Bob Thomas. She felt compelled to head the search for a new superintendent in 2017, despite having a very busy schedule.

“I was asked to do that,” Rountree said of heading the search committee in 2017. “I did it. I was going to school and I had a newborn at the time.”

She joined the school board in 2014. During her stint, she has worked with Knox County Mayor Tim Burchett and the county commission to address sidewalk and traffic issues at South-Doyle High School. She’s also worked with the Great Schools Partnership and worked to expand community schools and pushed for new athletic fields at South-Doyle Middle School.

She’s a proponent for the promotion of literacy and encouraged those who attended last week’s gathering to donate new or gently-used books which will be distributed throughout the schools on the south side of town.

“These books will be donated to the libraries in all of the schools in South Knox County,” said Rountree, who played a key role in developing and supporting the renovation of South-Doyle High School’s library.

“Growing great readers is a key to growing great schools. School libraries are a place where students can borrow, return and give books within their school community. Reading is the foundation of success for our students and more access to books will help strengthen that foundation.”

Rountree is an advocate for public education and she has served the people of South Knoxville proudly.

“It’s been an honor to serve the people of South Knoxville,” she said. “If I’m re-elected, I plan to implement more literacy programs and continue the 21st Century Library Model that we have at South-Doyle High School. I will work to expand CTE programs.”