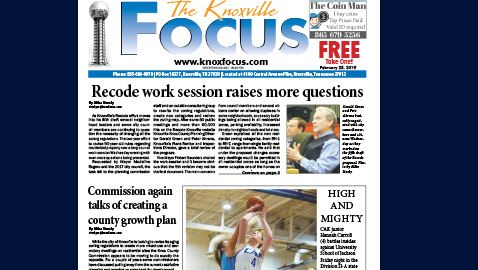 As Knoxville’s Recode effort moves into its fifth draft several neighborhood leaders and some city council members are continuing to question the necessity of changing all the zoning regulations. The two-year effort to revise 50-year-old rules regarding residential property saw a long council work session Wednesday evening with even more questions being presented.

Requested by Mayor Madeline Rogero and the 2017 city council, the task fell to the planning commission staff and an outside consultant group to rewrite the zoning regulations, create new categories and redraw the zoning map. After some 80 public meetings and more than 60,000 hits on the Recode Knoxville website Knoxville-Knox County Planning Director Gerald Green and Peter Ahrens, Knoxville’s Plans Review and Inspections Director, gave a brief review of the progress.

Vice Mayor Finbarr Saunders chaired the work session and it became obvious that the 5th revision may not be the final document. The main concerns from council members and several citizens center on allowing duplexes in some neighborhoods, accessory buildings being allowed in all residential zones, parking availability, increased density in neighborhoods and lot sizes.

Green explained all the new residential zoning categories, from RN-1 to RN-7, range from single family residential to apartments. He said that under the proposed changes accessory dwellings would be permitted in all residential zones as long as the owner occupies one of the homes on the property.

One of the suggestions from the council was to change the proposal  to create two categories of home occupations and require additional parking for added structures on a lot.

Councilman Andrew Roberto asked about affordable housing and Green responded that the state mandates that but the Recode proposal deals with “a variety of housing options.”

Another idea, to notify all Knox County homeowners of proposed changes.  Each council member was handed a possible “Notice to Knox County Property Owners” that could be sent out to notify property owners about  a final Recode vote.  If that notice goes out prior to the final vote it states that under Recode property to be rezoned would be able to keep its current use, even if the property is sold.

Councilman George Wallace asked for a comparison on accessory dwellings’ current regulations and Recode proposals. He said the new ordinance, if adopted, should “tighten it down” and not allow accessory dwellings in every residential area.

Roberto said that an additional structure on a residential lot would “change the character of a neighborhood.” He questioned parking at those properties and said off street parking should be required.

Councilwoman Stephanie Welch said that accessory dwellings reflect a “shift of society” and said that the extra homes would be used for “caretakers and adult children.”

“It’s something our society needs,” she said.

Citizens speaking on the Recode changes said that accessory structures should be located in denser populated areas of Knoxville. Green replied that, under the current proposal, those extra houses could be located in any residential area but would be subject to review prior to construction.

Councilwoman Lauren Rider cautioned against more alley closures noting that those alleys may be needed for entry into lots with accessory dwellings.

One citizen asked what would happen when a property with a home and accessory dwelling is sold. Green said as long as one of the structures is owner-occupied there would be no problem and noted that the city would not know if the extra home was rented but may know if a neighbor complains.

Green said the Recode effort is a compromise between density and preserving neighborhoods.

Councilwoman Seema Singh-Perez cautioned about regulating home offices, saying she doesn’t want to take away someone making a living while working at home.

Welch suggested including the Recode Stakeholder Advisory Committee in the final draft and also extending that group’s involvement for the first two years after adoption.

Council attorney Rob Frost suggested, at the next Recode work session, taking a straw poll of council feelings on various topics before a vote.

Citizens complained about the decreased sizes of some residential lots and asked why the zoning regulations must be changed.

David Hamilton, president of the Norwood Neighborhood Association, said, “My neighborhood is concerned.” He added “all the changes are to increase the tax revenue. You’ve wasted our time.”

Cindy Johnson of West Hills said she hates to “see us throw out all the wisdom over the past 60 years.” She said that mixed-use and home office categories need to be clarified.

The final draft is expected on March 15th and Green said he is taking “a sense of the council” feelings, taking notes and making revisions, in preparation for that proposal.