The Knoxville Focus for February 5, 2018 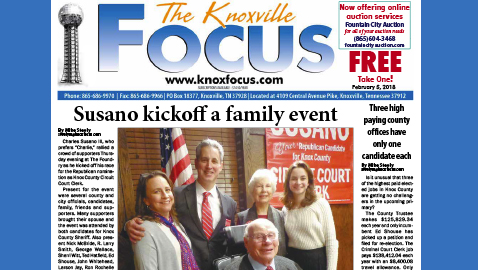 Charles Susano III, who prefers “Charlie,” rallied a crowd of supporters Thursday evening at The Foundry as he kicked off his race for the Republican nomination as Knox County Circuit Court Clerk.

Susano has been serving as Collections Coordinator and Legal Assistant to the Knox County Trustee’s Office. He is a graduate of the University of Tennessee. He and his wife live in West Hills and have been married for 20 years and have two children.

As an archeologist for UT he managed teams with the goal of preserving the history of Knox County and the East Tennessee area.

In thanking his supporters he said his father, Judge Charles D. Susano Jr., had instructed him to “keep it short” and he thanked his family for support, especially his wife Robin. Referring to public service, Susano said the most important person is “standing in front of you.” Susano’s humor was apparent in his brief remarks.

He thanked Trustee Ed Shouse for his guidance during Susano’s five years in that office and thanked Dean LaRue, Susano’s campaign manager.

Susano says he is a “lifelong Knoxvillian and grew up here going to school, worshiping, playing sports and learning the importance of a tight-knit community.”

“My family raised me to take pride in public service. My grandfather worked as a chemist at the Oak Ridge National Laboratories during World War II. My father served as a judge for more than two decades. Working with the Trustee and our fine team I have instituted successful programs to improve communications with people, streamlined workflows, increased revenues and emphasized customer service,” he said.

Susano’s wife, Robin, and daughter, Sophie, were there to support him as were his father and mother, Judge Charles D. Susano Jr. and Carolyn.

He will face three fellow Republicans in the May 1 primary. They are Don Ridings, Scott Smith and Tom Wheeler. The winner may go on to claim the office because there is no current Democratic opposition for the position. This Thursday is the deadline for candidates to turn in their qualifying petitions.