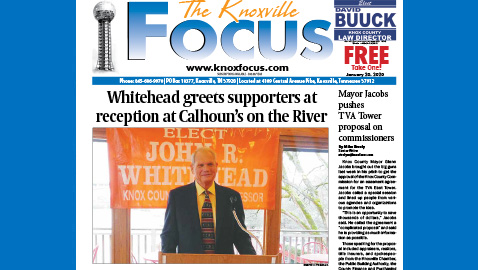 Whitehead greets supporters at reception at Calhoun’s on the River

A number of supporters showed up at a fundraising reception for John R. Whitehead late Wednesday afternoon at Calhoun’s on the River.

Whitehead, who is seeking a fourth term as Knox County Property Assessor, said that he was pleased with the turnout, which included Knox County Law Director Bud Armstrong, David Buuck, who is looking to replace the term-limited Armstrong, and Knox County Commissioner Richie Beeler, who is also seeking re-election.

“I’m really thrilled with the crowd,” said Whitehead, who didn’t make a speech, but worked the room greeting those who showed up to show their support as late-afternoon shifted to evening. “It’s been a great night.”

Whitehead has been with the Knox County Property Assessor’s office for nearly five decades, serving as property assessor from 2000-2008 before being term-limited.

After eight years away from the office, he ran and won the post again in 2016 and he’s seeking a possible final term as property assessor in 2020.

“Because of my age and everything, this is probably my last hoorah,” said Whitehead, a military veteran who served in Vietnam.

Even when Whitehead wasn’t serving in Knox County, he was no stranger to the office.

“When I wasn’t in office, I worked for the citizens,” he said. “I helped citizens appeal their property taxes, so I’ve been on both sides of this.”

During his previous terms as property assessor, Whitehead has taken pride in the fact that he works directly with the citizens whenever he can. He also said that he has been transparent while serving the citizens of Knox County.

“When people have a question, I tell them to call me,” he said. “I don’t think that there’s a question about this office that I can’t answer.

“And when people ask to speak to me, they get transferred directly to me and if I’m not there or don’t answer, I make sure that I always call them back. Everything in our office is public record except personal property assessment listings.”

Whitehead also noted that he’s happy to have the support of county officials such as Armstrong,

“Bud and I are from the same part of the country,” Whitehead said. “We’re both from East Knox County and I hope to see some other county officials come here tonight.”