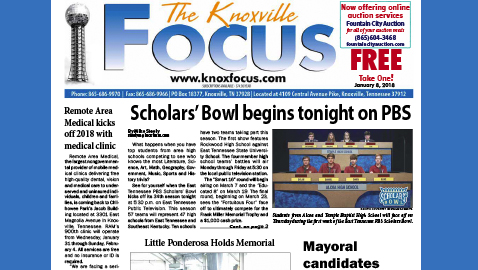 What happens when you have top students from area high schools competing to see who knows the most Literature, Science, Art, Math, Geography, Government, Music, Sports and History trivia?

The “Smart 16” round will begin airing on March 7 and the “Educated 8” on March 19. The final round, beginning on March 23, sees the “Fortuitous Four” face off to ultimately compete for the Frank Miller Memorial Trophy and a $1,000 cash prize.

When the popular academic contest began in 1985 Jefferson County High School won the competition. Since 2008 Oak Ridge and Farragut High Schools have taken the most wins, with Farragut taking the latest honor.

Produced by Ernie Roberts of East Tennessee PBS and hosted by Frank Murphy of Classic Hits 93.1 WNOX, the show is fast paced and features bonus questions for some answers. A winner is declared at the end of each show.

Murphy said that past Scholars’ Bowls have seen some close games and noted that one school team lost on the final answer by only five points.

Asked about the most unusual answers he’s heard Murphy said that occasionally a student will answer in the form of a question as if they were on Jeopardy and noted that recently he was recognized in a local library by someone who knew him as “the guy on High School Jeopardy.”

He also said the show had one team who, when they didn’t know the answer, always answered “Smith.” That answer was actually correct during a two-part question which surprised the team and the host.

Murphy said it takes about 50 minutes to film the 30-minute show and noted that one show took much longer because a TV monitor malfunctioned and the game had to start all over again.

“But for the most part the show is in real time,” he said.

“These are really smart kids and a diverse group,” Murphy said.

Questions asked during the show come from a pool of questions submitted by various people including students and professionals.

Roberts said that math questions tend to be the hardest because there are only 6 seconds allowed to respond and 10 seconds for bonus questions. He said that cell phones and smart watches have been banned from the show.

“We have tons and tons of questions,” Roberts said, adding, “but we always consider what is reasonable to expect from kids.”

“One of the funniest answers came when they were asked what President Andrew Johnson asked to be buried with him. One of the students answered ’Impeachment Papers.’ The correct answer was a copy of the U. S. Constitution,” he said.

“The students appear to be very well rounded this year. Recently it seems the majority of wins are not decided until the final minutes,” Roberts said.

“The kids are, for the most part, engaged and the scores are better,” he said of the past few seasons.

“Academics don’t usually get the praise that athletics does,” Roberts said.

Knox County Schools will begin to take part beginning in the January 16 show.