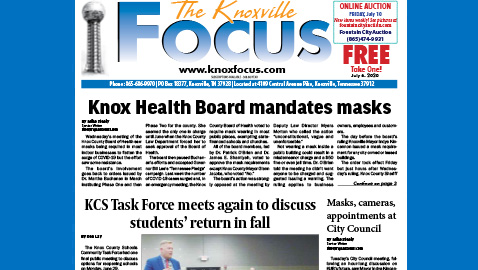 Wednesday’s meeting of the Knox County Board of Health saw masks being required in most indoor businesses to flatten the surge of COVID-19 but the effort saw some resistance.

The board’s involvement goes back to orders issued by Dr. Martha Buchanan in March instituting Phase One and then Phase Two for the county. She seemed the only one in charge until June when the Knox County Law Department forced her to seek approval of the Board of Health.

The board then paused Buchanan’s efforts and accepted Governor Bill Lee’s “Tennessee Pledge” campaign. Last week the number of COVID-19 cases surged and, in an emergency meeting, the Knox County Board of Health voted to require mask wearing in most public places, exempting state-financed schools and churches.

All of the board members, led by Dr. Patrick O’Brien and Dr. James E. Shamiyeh, voted to approve the mask requirements except Knox County Mayor Glenn Jacobs, who voted “No.”

The board’s action was strongly opposed at the meeting by Deputy Law Director Myers Morton who called the action “unconstitutional, vague and unenforceable.”

Not wearing a mask inside a public building could result in a misdemeanor charge and a $50 fine or even jail time. Dr. O’Brien told the meeting he didn’t want anyone to be charged and suggested issuing a warning. The ruling applies to business owners, employees and customers.

The day before the board’s ruling Knoxville Mayor Indya Kincannon issued a mask requirement for any city-owned or leased buildings.

The order took effect Friday but just hours after Wednesday’s ruling, Knox County Sheriff Tom Spangler issued a statement that his deputies will not enforce the board’s order. He questioned the constitutionality of the order and said, “My Deputies are sworn to support and defend the constitution. We will rely on the citizens of this community to protect themselves and others in the manner they find appropriate.”

Mayor Jacobs issued a statement noting the decision came from the board and not him. He also questioned whether the decision is constitutional.

Dr. Buchanan announced 271 active cases in the county, an increase of 30 cases in one day and a 55% increase over a one week period. She said the number of cases is outpacing the number of tests.

While Mayor Jacobs questioned the number of cases reflecting the number of tests, Dr. Shamiyeh said the number of hospitalized patients is rising and called the increase a “surge.” The doctor said that during the initial shut-down he saw a decrease in cases but said the current increase shows “all that is back now.”

Dr. O’Brien said Knox County is now on the state’s “radar” due to the increase in cases and cited 225 emails from the public about the increase.

“We have the ability to layer on,” he said of adding local requirements beyond the state order.

Morton strongly disagreed and said the board can not vary from the governor’s order and said action can only be taken if there is a “rational basis” such as “the hospitals being strangled” with cases.

Dr. O’Brien then moved to impose the order.

“I look at science. Let’s do what’s right for the people and make sure we don’t get to the worst. Right now we’ve got to tamp down,” O’Brien said.

“Something needs to change,” Dr. Buchanan said, adding, “This board needs to act swiftly.”