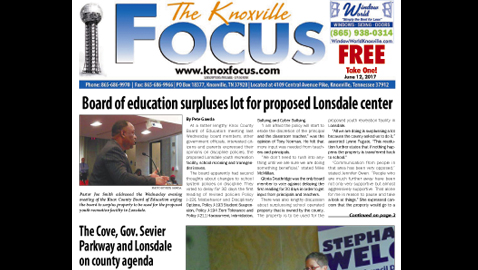 The Cove, Gov. Sevier Parkway and Lonsdale on county agenda

The storm damage at The Cove at Concord Park may be discussed when the Knox County Commission meets in work session next Monday at 5 p.m. in the City-County Building. The storm on May 27 downed trees, power lines and damaged the playground at the popular West Knox County park.

A report on the expenses related to the storm damage may be given by the finance department. Early estimates just after the storm were for around $150,000 or possibly higher. Knox County Parks and Recreation were hoping to cover the cost without asking for additional funds. Legacy Parks Foundation has established a fund for repairs there.

Responding to the downed power lines there, LCUB is establishing underground power lines to the park. The Cove was closed following the storms and during repairs there and a concert by a local band was cancelled.

The Cove is located at 11808 South Northshore Drive, on the banks of the Tennessee River. It features a walking trail, playground, pavilion, swimming area, picnic tables with grills, and a sand volleyball court. The Cove also offers kayak, canoe and paddleboard rentals.

Dailey told The Focus that in at least two incidents people have obtained a building permit for a house and then turned the house into a business. He said that commercial businesses are only permitted along John Sevier Highway at the intersections.

“It’s designated as a historic highway but the only regulation on that is that buildings can’t be more than 35-feet tall and no billboards are allowed,” he said.

“The community is concerned about the development there,” he said.

The Knox County School Board is asking the commission to accept surplus property located at Sam E. Hill Family Community Center at 1725 Delaware Avenue. The system’s public relations director, Carly Harrington, said the vacant lot adjoining the pre-school is just over an acre large and is being donated to the county so it may be used by the proposed Emerald Youth Center in Lonsdale.

The donation of the property carries the stipulation that “Should Knox County and Knoxville not successfully execute an agreement to develop a multiple million dollar multi-purpose arts and education youth-serving facility for the children of Lonsdale and the greater Knoxville community the board requests that Knox County return the property to the Board of Education.”

Other items on the agenda include a resolution by Commissioner Charles Busler to honor Tindell’s Building Materials. Chairman Dave Wright has a motion to honor Richie Beeler’s retirement from the Register of Deeds Office. Two judicial magistrates may be appointed as well as appointments made to Visit Knoxville and other boards.