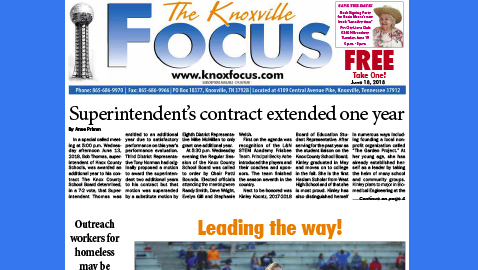 At 5:30 p.m. Wednesday evening the Regular Session of the Knox County School Board was called to order by Chair Patti Bounds. Elected officials attending the meeting were Randy Smith, Dave Wright, Evelyn Gill and Stephanie Welch.

First on the agenda was recognition of the L&N STEM Academy Frisbee Team. Principal Becky Ashe introduced the players and their coaches and sponsors. The team finished the season seventh in the country.

Next to be honored was Kinley Koontz, 2017-2018 Board of Education Student Representative. After serving for the past year as the student liaison on the Knox County School Board, Kinley graduated in May and moves on to college in the fall. She is the first Haslam Scholar from West High School and of that she is most proud. Kinley has also distinguished herself in numerous ways including founding a local non-profit organization called “The Garden Project.” At her young age, she has already established herself as a leader by taking the helm of many school and community groups. Kinley plans to major in Biomedical Engineering at the University of Tennessee.

The next agenda item that was discussed related to board policy. The board discussed Knox County Board of Education Policy B-180 “Public Forum,” as amended. Tony Norman made a motion to limit Public Forum to one hour total and limit each speaker to three minutes each. Norman stated that “Public Forum has been abused. After four to five people have spoken, the topic is covered and the rest is venting.”

Fourth District Representative Lynne Fugate emphatically disagreed with Norman and said she could not support his motion. Amber Rountree, Ninth District Representative, proposed a substitute motion, seconded by Fugate, that would revise some of the wording in lines 27, and lines 32-35 but leaving the time limits unchanged. This substitute motion carried without contention.