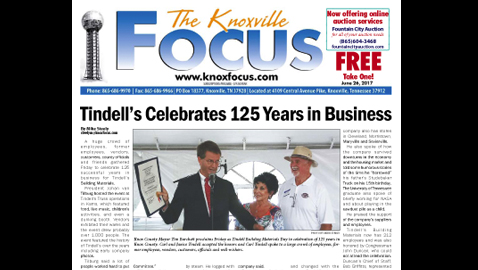 President Johan van Tilburg hosted the event at Tindell’s Truss operations in Karns, which featured food, live music, children’s activities, and even a dunking booth. Vendors exhibited their wares and the event drew probably over 1,000 people. The event featured the history of Tindell’s over the years including early company photos.

Tilburg said a lot of people worked hard to put the celebration together and added, “No body worked harder than Sue Walker and the 125 Year Committee.”

“My grandfather was born before the Civil War and by 1892 was operating a saw mill that was driven by steam. He logged with a team of horses and I’ve heard he had the first car in Halls,” Carl Tindell, chairman of the large local company said.

Tindell recalled the history of the family-owned company which, over the years, has grown and changed with the times. Tindell’s began in Halls and their Norris Freeway store remains their Knoxville location but the company also has stores in Cleveland, Morristown, Maryville and Sevierville.

He also spoke of how the company survived downturns in the economy and the housing market and told some humorous stories of the time he “borrowed” his father’s Studebaker Truck on his 15th birthday. The University of Tennessee graduate also spoke of briefly working for NASA and about playing in the sawdust pile as a child.

He praised the support of the company’s suppliers and employees.

Tindell’s Building Materials now has 212 employees and was also honored by Congressman John Duncan, who could not attend the celebration.  Duncan’s Chief of Staff, Bob Griffitts, represented the congressman at the event and expressed Duncan’s well wishes and congratulations.