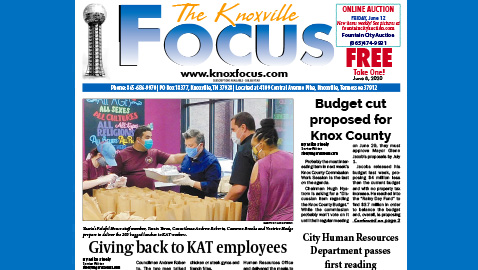 Giving back to KAT employees

“They are our front line people we don’t think about. They provide an essential service,” said Cameron Brooks of Realty Executives Associates and the Knox County Election Commission.

He was talking about Knoxville Area Transit employees. Brooks had been pondering how he might show them some appreciation and he called Councilman Andrew Roberto. The two men talked about it and decided on a meal for the employees and followed through with the idea Friday.

Brooks and Roberto began raising funds on Facebook and contacted Yassin’s Falafel House. “KAT Worker Appreciation Day” was announced and Friday at 11 a.m. Brooks and Roberto met at the restaurant at 706 Walnut Street to pick up individually wrapped and bagged chicken or steak gyros and french fries.

Ventrice Hodge, vice president of the Amalgamated Transit Union, joined the two men in helping to bag the 200 lunches with restaurant owner Yassin Terou. The staff of the Falafel House spent many hours and effort to prepare and begin bagging the food.

“I know Yassin really wanted to give out to the community,” Brooks said.

They worked to coordinate the meals with KAT’s Human Resources Office and delivered the meals to the KAT office on Magnolia Avenue to be given out to employees.

Hodge said the bags of food would be picked up by transit drivers as they report for their work shifts.

Brooks said that a fund raising effort to cover the cost of the food exceeded what was sought and the rain held off as they loaded two vehicles to deliver a free meal to the KAT workers.