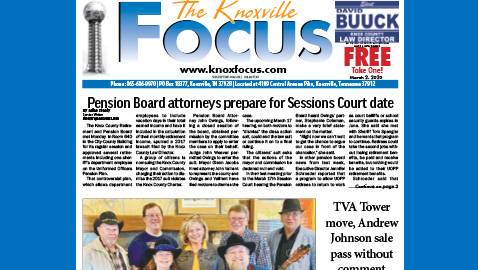 The Knox County Retirement and Pension Board met Monday in Room 640 in the City-County Building for its regular session and approved several retirements including one sheriff’s department employee on the Uniformed Officers Pension Plan.

That controversial plan, which allows department employees to include vacation days in their total earned income and have it included in the calculation of their monthly retirement income, spurred a 2017 lawsuit filed by the Knox County Law Director.

Pension Board Attorney John Owings, following a closed session of the board, obtained permission by the committee members to apply to enter the case on their behalf.  Judge John Weaver permitted Owings to enter the suit. Mayor Glenn Jacobs hired attorney John Valliant to represent the county and Owings and Valliant have filed motions to dismiss the case.

The upcoming March 17 hearing, on both motions to “dismiss” the class action suit, could end the law suit or continue it on to a final ruling.

The citizens’ suit asks that the actions of the mayor and commission be declared null and void.

In their last meeting prior to the March 17th Session Court hearing the Pension Board heard Owings’ partner, Stephanie Coleman, make a very brief statement on the matter.

“Right now we can’t wait to get the chance to argue our case in front of the chancellor,” she said.

In other pension board news from last week, Executive Director Jennifer Schroeder reported that a program to allow UOPP retirees to return to work as court bailiffs or school security guards expires in June. She said she met with Sheriff Tom Spangler and he wants that program to continue. Retirees could take the second jobs without losing retirement benefits, be paid and receive benefits, but nothing would be added to their UOPP retirement benefits.

Schroeder said that request will be taken up in a March 24th 2 p.m. meeting of the Document Committee.

The pension board also noted receipt of an invoice from the office of Owings explaining legal fees as of January 31st. The bill is for $7,522.44 and details the efforts by that office on behalf of the pension board including various hourly rates for work. Owings spent 5.50 hours at $350 an hour for a total of $1,925. Coleman spent 1.5 hours at the same rate for a total of $425. Other items on the bill included work by other staffers including Sarah D. Jarrard, who spent 17.25 hours working on pension board matters for a total of $4,312.50.  Retirement and Pension Board Executive Director Jennifer Schroeder told the board that Sheriff Tom Spangler would like to continue a program allowing UOPP retirees to work as bailiffs and school guards. That current program ends in June and the sheriff hopes to continue it.