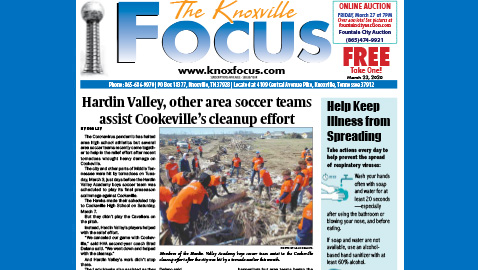 The city and other parts of Middle Tennessee were hit by tornadoes on Tuesday, March 3, just days before the Hardin Valley Academy boys soccer team was scheduled to play its final preseason scrimmage against Cookeville.

The Hawks made their scheduled trip to Cookeville High School on Saturday, March 7.

But they didn’t play the Cavaliers on the pitch.

Instead, Hardin Valley’s players helped with the relief effort.

“We canceled our game with Cookeville,” said HVA second-year coach Brad Delano said. “We went down and helped with the cleanup.”

The Lady Hawks also assisted as they gathered supplies and gift cards for the victims.

Other area teams also joined in the effort. Those schools included Catholic, Central, Farragut and Bearden. Area coaches including the Admirals’ Ray Dover, the Bobcats’ Chris Quinn, the Bulldogs’ Ryan Radcliffe and the Irish’s Gordon Heins took different roles in helping with the relief effort.

“We had a lot of people get involved,” Delano said.

“Between them, our team and our girls teams, we donated supplies and hundreds of dollars worth of gift cards.

Dover and his wife made a trip to deliver relief supplies to Cookeville.

“Our parents got together with some parents from Catholic and gathered the supplies and I drove them down there with my wife,” Dover said.

The 2020 high school boys soccer season is on hold due to recent happenings but area teams began the campaign before students departed for Spring Break and it was Central that made the final donations for the effort before the season came to a standstill.

The Bobcats played their home opener against Seymour on Thursday, March 12 at Dan Y. Boring Stadium, and in lieu of paying for tickets, fans were encouraged to donate supplies and non-perishable food items to the Cookeville tornado victims.