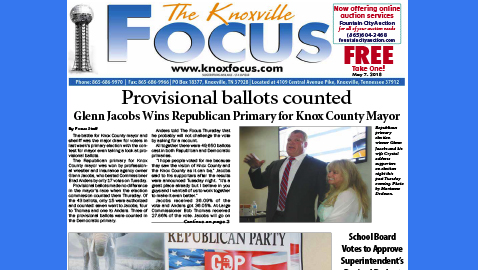 The battle for Knox County mayor and sheriff was the major draw for voters in last week’s primary election with the contest for mayor even taking a look at provisional ballots.

The Republican primary for Knox County mayor was won by professional wrestler and insurance agency owner Glenn Jacobs, who bested Commissioner Brad Anders by only 17 votes on Tuesday.

Provisional ballots made no difference in the mayor’s race when the election commission counted them Thursday. Of the 43 ballots, only 15 were authorized and counted: seven went to Jacobs, four to Thomas and one to Anders. Three of the provisional ballots were counted in the Democratic primary.

Anders told The Focus Thursday that he probably will not challenge the vote by asking for a recount.

All together there were 49,650 ballots cast in both Republican and Democratic primaries.

“I hope people voted for me because they saw the vision of Knox County and the Knox County as it can be,” Jacobs said to his supporters after the results were announced Tuesday night. “It’s a great place already but I believe in you guys and I want all of us to work together to make it even better.”

Jacobs received 36.09% of the vote and Anders got 36.05%. At-Large Commissioner Bob Thomas received 27.86% of the vote. Jacobs will go on to face Democrat primary winner Linda Haney who received more than 55% of the votes for that party’s county mayor contest.

Former Knox County Chief Deputy Tom Spangler trounced Deputy Lee Tramel in the Republican Primary Tuesday, getting almost 65% of the votes. A total of 40,467 people voted in the election that saw Spangler getting 26,241 votes and Tramel getting 14,226.

The sheriff’s race saw no Democratic opponent so Spangler will take office in September.

Two longtime Knox County political figures were defeated as Republican voters chose Justin Biggs over R. Larry Smith for At-Large Seat 11 on county commission and Sherry Witt defeated State Representative Roger Kane in the race for county clerk, with Witt getting more than 61% of the vote. Biggs will face Democrat Tori Griffin in the August General Election. There is no Democrat on the ballot in August for clerk so Witt take the position.

Charlie Susano bested four other candidates for Circuit, Civil and Juvenile Court Clerk. He pulled 37% of the vote in the five man race, defeating Bo Bennett, Don Ridings, Scott Smith and Tim Wheeler. He will face Democrat Sheri Ridgeway in the general election.

Nick McBride bested Steve Hall in the race for Register of Deeds, getting more than 55% of the vote. There was no Democrat on the ballot so McBride will take the seat.

Unopposed Republicans in Tuesday’s vote that will face a Democratic opponent in the August 2 General Election include Commission Chairman Randy Smith against Cody Biggs in the District 3 race. Commissioner Charles Busler will face Steve Hart in the District 7 race.