The Knoxville Focus for November 9, 2020 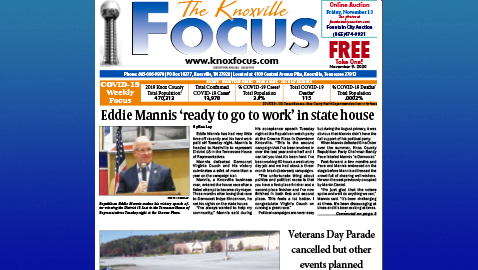 Eddie Mannis ‘ready to go to work’ in state house

Eddie Mannis has had very little time off recently and his hard work paid off Tuesday night. Mannis is headed to Nashville to represent District 18 in the Tennessee House of Representatives.

Mannis defeated Democrat Virginia Couch and his victory culminates a stint of more than a year on the campaign trail.

Mannis, a Knoxville business man, entered the house race after a failed attempt to become city mayor. Three months after losing that race to Democrat Indya Kincannon, he set his sights on the state house.

“I’ve always wanted to help my community,” Mannis said during his acceptance speech Tuesday night at the Republican watch party at the Crowne Plaza in Downtown Knoxville. “This is the second campaign that I’ve been involved in over the last year-and-a-half and I can tell you that it’s been hard. I’ve been working 60 hours a week at my day job and we had about a three-month break (between) campaigns.

“The unfortunate thing about politics and political races is that you have a first-place finisher and a second-place finisher and I’ve now finished in both first and second place. This feels a lot better. I congratulate Virginia Couch on running a great race.”

Political campaigns are never easy but during the August primary, it was obvious that Mannis didn’t have the full support of his political party.

Fast forward a few months and Pace and Mannis embraced on the stage before Mannis addressed the crowd full of cheering well-wishers. He won the seat previously occupied by Martin Daniel.

“I’m just glad that the voters spoke and we’ll do anything we can,” Mannis said. “It’s been challenging at times. It’s been discouraging at times and it’s been exciting at times.

“I will empower and encourage young people to and welcome them to the party and we must work across the board for mental health and to combat problems like opioids and suicide,” Mannis said. “We must treat everyone equally.”

Mannis was one of several Knox County Republicans who celebrated victories downtown on Election Day, 2020.

Becky Duncan-Massey was re-elected for her seat representing District 6 in the Tennessee House of Representatives. Jason Zachary will return to represent District 14.

Justin Lafferty will return to the state house to represent District 89.