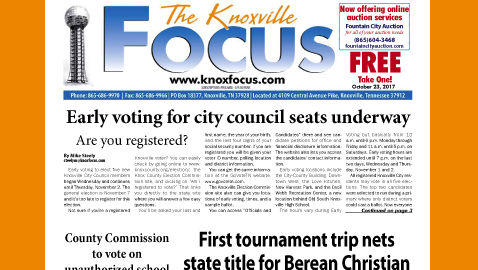 Early voting to elect five new Knoxville City Council members began Wednesday and continues until Thursday, November 2. The general election is November 7 and it’s too late to register for this election.

Not sure if you’re a registered Knoxville voter? You can easily check by going online to www.knoxcounty.org/election/, the Knox County Election Commission site, and clicking on “Am I registered to vote?” That links you directly to the state site where you will answer a few easy questions.

You’ll be asked your last and first name, the year of your birth, and the last four digits of your social security number. If you are registered you will be given your voter ID number, polling location and district information.

You can get the same information at the GoVoteTN website, www.govotetn.com.

The Knoxville Election Commission site also can give you locations of early voting, times, and a sample ballot.

The hours vary during Early Voting but basically from 10 a.m. until 6 p.m. Monday through Friday and 11 a.m. until 5 p.m. on Saturdays. Early voting hours are extended until 7 p.m. on the last two days, Wednesday and Thursday, November 1 and 2.

All registered Knoxville City residents may vote in all five elections. The top two candidates were selected to run during a primary where only district voters could cast a ballot. Now everyone has a vote on the new five council members.

Whoever is elected will be welcomed by the current council members in the days following the election in a series of breakfast events with the mayor, city attorney and council, an introduction to the city council office staff, and an orientation workshop.

The newcomers take office on Saturday, December 16 at 11 a.m. in a special called meeting when the existing four council members and the new five members will elect a vice mayor, beer board chair, and a Knoxville Transportation Authority Representative. A reception is planned in the City-County Building’s small assembly room following the ceremony.

The new council will meet for the first time on Tuesday, December 18.