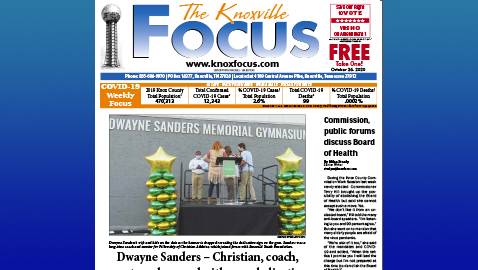 If you didn’t know Dwayne Sanders, there are at least two things about him you can be sure of. The first is that he died way too young: he was 52 when he died of cancer in April of 2018. The second? He touched many lives, and a whole lot of people thought a whole lot of him.

On Tuesday, Oct. 20, the memory of Sanders – a longtime basketball coach and mentor to inner-city youth – was honored when the gymnasium at the Emerald Youth Foundation on Broadway Avenue was named for him. Some 125 people – friends, family, colleagues and mentorees among them – attended the ceremony.

One of the many speakers was Cumecus Cates, a Fulton high-school grad currently attending Alice Lloyd College in Kentucky. “Dwayne for me was much like a father figure,” said Cates. “My dad has been in prison most of my life, so I haven’t had him around. I’ve been blessed with people like Dwayne Sanders and many other coaches who are God-fearing men. I give Dwayne a lot of credit for where I am today.”

In 1992, Sanders went to work for the Fellowship of Christian Athletes in Knoxville. In 2012, he approached his friend and former Maryville College roommate, Steve Diggs – founder of EYF – with the idea of the two organizations joining forces. Sanders thought the combined effort would result in a broader outreach that could help more kids and do more for the community. Diggs was on board.

“Dwayne wanted to combine his passion for urban youth sports and his commitment to the Fellowship of Christian Athletes, so he came up with the idea of ‘let’s get FCA and EYF to join in a partnership and grow our sports ministry across the city,’” said Diggs.

It turned out to be a good decision, especially for area kids wanting to play sports. During Sanders’s tenure, the number of kids and teams grew exponentially, from 322 kids on 38 teams, to over 1600 kids on 169 teams. A number of new sports were also added. The expansion allowed many kids to attend FCA camps and to get involved with campus ministries activities.

Leon Willis is the Tennessee State Director of FCA. He hired Sanders in the fall of 1992. He was one of numerous speakers on the dais.

“What can I say about Dwayne Sanders,” said Willis. “Dwayne lived out his faith …in that passion I got to know a man of great kindness, a man who had a can-do attitude. For anyone who knows Dwayne, he loved well. I’m so proud of the man that he was, the man that he is still, and the lives that were touched by his hard work and diligent pursuit of young people to the gospel.”

“(This event) is incredibly special and the legacy he left in this city, it’s obviously very big,” said Lisa Sanders. “It’s just such an honor to be recognized like this. There’s not a day that goes by that I don’t think about him.”

Lisa Sanders said that Dwayne would have been in complete disbelief at Tuesday’s event that honored him.

“So special,” said Madison Sanders of the event that attached her father’s name to a gym. “Not only did everyone here love him, this was a testimony to his own life. He was my best friend ever. I could go to him about anything.”

“I think (the event) is really special just because he’s influenced so many people here, so many players here, students here,” said Taylor Sanders. “And I think it couldn’t have gone any better than naming the gym for him.”

Diggs made the crowd laugh with a roommate story that involved living with Sanders’s cat. He then got more serious.

“I was there in that room that night at Maryville’s FCA event when Dwayne made the decision to become a follower of Jesus Christ,” Diggs said. “And that was quite special. I think it’s fitting that we would name this facility, this gymnasium, after Dwayne.”

Cates was asked if Sanders was a better coach or mentor. After a moment, he decided on the latter. “If Dwayne hadn’t given me the opportunity, I wouldn’t be where I am now,” Cates said. “He was just an awesome person. I didn’t really get to say goodbye to Dwayne. Today provided some closure for me.”

It was rather obvious from Tuesday’s event that when Sanders died, Knoxville lost one fine man.