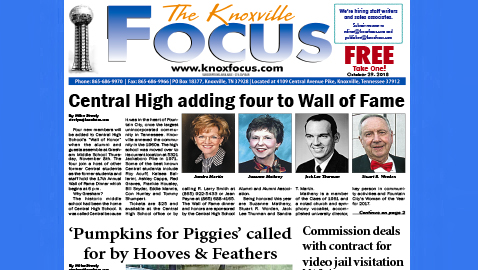 Four new members will be added to Central High School’s “Wall of Honor” when the alumni and guests assemble at Gresham Middle School Thursday, November 8th. The four join a host of other former Central students as the former students and staff hold the 17th Annual Wall of Fame Dinner which begins at 6 p.m.

The historic middle school had been the home of Central High School. It was called Central because it was in the heart of Fountain City, once the largest unincorporated community in Tennessee. Knoxville annexed the community in the 1960s. The high school was moved over to its current location at 5321 Jacksboro Pike in 1971. Some of the best known Central students include Roy Acuff, Kelsea Ballerini, Ashley Capps, Red Graves, Frankie Housley, Bill Snyder, Eddie Mannis, Con Hunley and Tommy Shumpert.

Matheny is a member of the Class of 1961 and a noted church and symphony vocalist, accomplished university director, key person in community activities and Fountain City’s Woman of the Year for 2017.

Worden, Class of 1949, was a captain in the U. S. Army, a long-time insurance and investment executive and civic leader.

Thurman was in the Class of 1952, a military cryptologist, leader in industrial management at Oak Ridge and Levi Strauss and Company, a Fountain City Town Hall chairman and Fountain City’s Man of the Year for 1984.

Sandra T. Martin, Class of 1973, was the founder and owner of the largest commercial interior design firm in East Tennessee, graduate of Leadership Knoxville, adjunct university professor and remains active in many civic affairs.