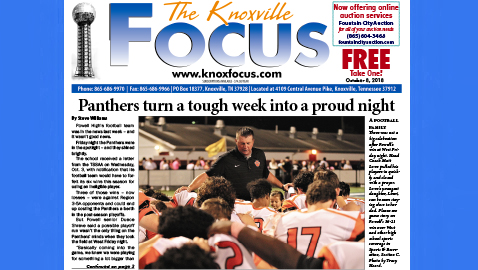 Panthers turn a tough week into a proud night

Powell High’s football team was in the news last week – and it wasn’t good news.

Friday night the Panthers were in the spotlight – and they shined brightly.

The school received a letter from the TSSAA on Wednesday, Oct. 3, with notification that its football team would have to forfeit its six wins this season for using an ineligible player.

Three of those wins – now losses – were against Region 3-5A opponents and could end up costing the Panthers a berth in the post-season playoffs.

But Powell senior Duece Shreve said a possible playoff run wasn’t the only thing on the Panthers’ minds when they took the field at West Friday night.

“Basically coming into the game, we knew we were playing for something a lot bigger than just the playoff run,” said Shreve after Powell posted an impressive 36-21 win over West. “We were playing for the Powell community.”

A large turnout of Powell fans were on hand for the road game, much like they have been all season in their support of the football team. The Powell community also was invited to come out for the Panthers’ weekly pep rally Friday morning.

“We knew we had to put up a good fight today to show what we were as a team and that the (TSSAA) situation will not define our team,” said Shreve, a quarterback and defensive back. “We had to be bigger than the situation.”

When asked if he knew what Powell’s playoff chances were, Shreve said, “I have no idea.”

Powell was 6-1 overall and 3-1 in region play prior to the TSSAA sanction. After the win over West, the Panthers are now 1-7 overall and 1-4 in the region. As far as their playoff hopes are concerned, the Panthers will face a must-win situation in their next game at Oak Ridge on Oct. 19.

Powell has been seeking its first playoff berth since 2012.

Alvin Stacey, a senior defensive lineman, also spoke up after the game.

“This week has been really emotional to the whole team because I feel like we didn’t know anything about it (ineligible player) and they hit us with it late in the season,” he said.

Stacey said the forfeits really hurt the team’s playoff chances, but he said the team still came out in the West game and proved it was just as good with or without the ineligible player.

“This team is a family and we can come through any adversity,” he added.

Stacey left West High Friday night with his head up.

“I leave here emotional and proud of my teammates,” he said. “It’s been a good year, and we’re not going to go down without a fight.”

TSSAA Executive Director Bernard Childress stated in his Oct. 3 letter to Powell High: “The administration incorrectly submitted the transfer form by stating the student was eligible due bona fide change of residence into their (Powell) zone. The family moved from residence A to B but never moved  to residence C in the Powell zone.”

PHS Athletic Director Chad Smith stated: “These circumstances are a result of incorrect documentation. There has never been any effort or intention whatsoever to misrepresent the athletic interests of Powell High School. We will comply with all of the instructions set forth by the TSSAA regarding this situation.”