The Knoxville Focus for September 3, 2019

By design on September 2, 2019Comments Off on The Knoxville Focus for September 3, 2019 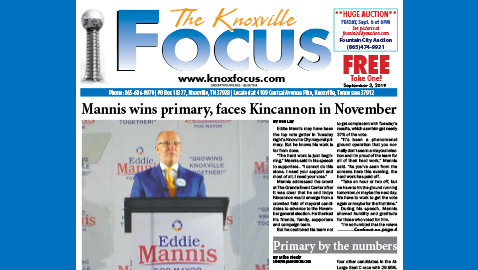 Eddie Mannis may have been the top vote getter in Tuesday night’s Knoxville City mayoral primary. But he knows his work is far from done.

“The hard work is just beginning,” Mannis said in his speech to supporters.. “I cannot do this alone. I need your support and most of all, I need your vote.”

Mannis addressed the crowd at The Grande Event Center after it was clear that he and Indya Kincannon would emerge from a crowded field of mayoral candidates to advance to the November general election. He thanked his friends, family, supporters and campaign team.

But he cautioned his team not to get complacent with Tuesday’s results, which saw him get nearly 37% of the vote.

“It’s been a phenomenal ground operation that you normally don’t see in a mayoral election and I’m proud of the team for all of their hard work,” Mannis said. “As you’ve seen from the screens here this evening, the hard work has paid off.

“Take an hour or two off, but we have to hit the ground running tomorrow, or maybe the next day. We have to work to get the vote again or maybe for the first time.”

During his speech, Mannis showed humility and gratitude for those who voted for him.

“I’m so humbled that the voters of the City of Knoxville have shown their confidence in the blueprint that I’ve been laying for the city’s growth and development,” he said. “If fortunate enough to be elected your mayor in November, I promise you I will work tirelessly and I will never take one single vote for granted.”

While the evening was one for celebration, Mannis acknowledged his opponents, including Marshall Stair (who finished a close third in the primary), Michael Andrews, Calvin Skinner and Fletcher Burkhardt.

“We will now face Indya Kincannon and I know that this is the end of the road for some people,” Mannis said. “Those people are all good people and they have been called to serve.

“I’ve spent time with them over the past year and we might’ve had some philosophical differences but we all love Knoxville.”

For Mannis, the opportunity to be mayor of Knoxville would be a dream come true.

“I’ve been fortunate to call Knoxville my home for my entire life,” he said. “This is a city I love and believe in. I never dreamed that I would have this opportunity when I grew up in Frog Level, just a short way from where we are tonight.”

Mannis, who has run his family business, Prestige Cleaners for nearly four decades, said that customer service has loomed large there and he vowed to take those principles to the mayor’s office if elected in November.

“Customer service is what we are about at Prestige Cleaners and our citizens are our customers,” he said. “I will make sure that each of our citizens is represented and during our first 100 days, I will implement a program called Kids First.

“I’ve seen mothers and fathers, aunts and uncles, grandparents and great-grandparents and I want to make sure that we have neighborhoods where our kids can grow and prosper.”

The Kids First program is part of Mannis’ Knoxville First Initiative, which includes having strong and safe neighborhoods, economic development and vibrancy, healthy citizens and keeping a focus on the people.