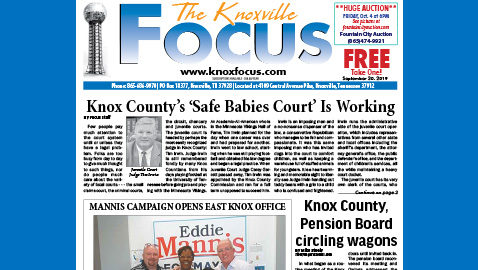 Few people pay much attention to the court system until or unless they have a legal problem. Folks are too busy from day to day to give much thought to such things, nor do people much care about the variety of local courts – – – the small claims court, the criminal courts, the circuit, chancery and juvenile courts. The juvenile court is headed by perhaps the most easily recognized judge in Knox County: Tim Irwin. Judge Irwin is still remembered fondly by many Knox Countians from his days playing football at the University of Tennessee before going pro and playing with the Minnesota Vikings. An Academic-All-American who is in the Minnesota Vikings Hall of Fame, Tim Irwin planned for the day when one career was over and had prepared for another. Irwin went to law school, starting when he was still playing football and obtained his law degree and began a legal practice. When Juvenile Court Judge Carey Garrett passed away, Tim Irwin was appointed by the Knox County Commission and ran for a full term unopposed to succeed him.

Irwin is an imposing man and a no-nonsense dispenser of the law, a conservative Republican who manages to be fair and compassionate. It was this same imposing man who has invited dogs into the court to comfort children, as well as keeping a warehouse full of stuffed animals for youngsters. It is a heartwarming and memorable sight to literally see Judge Irwin handing out teddy bears with a grin to a child who is confused and frightened. Irwin runs the administrative side of the juvenile court operation, which includes representatives from several other state and local offices including the sheriff’s department, the attorney general’s office, the public defender’s office, and the department of children’s services, all the while maintaining a heavy court docket.

The juvenile court has its very own clerk of the courts, who like Judge Irwin, is elected by the people. That Clerk is Charlie Susano, who is also the Clerk of the Circuit and Civil Sessions Courts. Susano and his staff follow the state law which give them the responsibility for assisting with the operation of the Juvenile Court, which also has a state-of-the-art detention center named for and run by Richard Bean. The Richard L. Bean Detention Center is one of the few in the country to be accredited and Bean is highly esteemed by professionals in his field.

The newest addition to the Knox County Juvenile Court is the “Safe Babies Court.” The Tennessee General Assembly passed legislation intended to improve the outcomes for perhaps the most vulnerable children in the state’s welfare system: infants and toddlers. The program specifically addresses the needs of children from infancy to three years of age.

The new program adopted by the legislature was based upon the success of two pilot programs based in Nashville and Grundy County in Middle Tennessee. The Safe Babies Court Team is designed to improve how the various bureaucracies interact with the people coming into the system: the courts, children’s services and child welfare agencies are supposed to benefit from the program by taking a different and more practical approach to solving problems. By working together and sharing information, the agencies and the courts can expedite services for needy children and decrease the time children spend in foster care.

“Just about everybody knows government ‘red tape” and bureaucracy is a problem,” Judge Tim Irwin says. “One important concept of the Safe Babies Court is to streamline the process so that everybody who is supposed to have the best interests of the child is on the same page and working seamlessly together.”

To that end, Judge Irwin assigned Magistrate Michael Fortune to the Safe Babies Court and hired Kaki Reynolds as the first coordinator of the court. Fortune is a quiet, friendly man, well-liked by those who work with him, who, as might be expected, has a deep and abiding interest in the welfare of children. Magistrate Fortune said he is “excited” about the Safe Babies Court “because it gives the participants and their families real hope of maintaining sobriety” due to “the increase in support from our staff and resource partners.” Fortune points out it helps those folks receive “consistent oversight from the court.”

Magistrate Fortune says it is essential “to establish a relationship with the clients and caregivers so that we can recognize when a person is beginning to struggle, so that we can all work together to address the root causes of why a parent loses custody.”

Kaki Reynolds, Coordinator of the Safe Babies Court, says it is vital for the judicial system to “thoroughly address the impact of substance abuse.” “Most of the babies in our program are impacted by opioid or methamphetamine use by their parents,” Reynolds said. ‘We work diligently to wrap services around the parents and the child to help the family get on the right track and to increase the chances for a healthy family future.” Reynolds points to working “heavily on the relationship between a parent and a child” and the need to “try to nurture that from the very beginning, even if they aren’t together in the same home.”

Charlie Susano, Clerk of the Juvenile Court, added, “I think everybody realizes the significance of the opioid crisis across this country and here at home in East Tennessee, but it really is a very different thing to actually see what it does to families, and the heartbreaking impact it has on innocent babies and children.” Susano says, “Ultimately, the Safe Babies Court is a program intended to give some hope where little or none existed before, and work to keep families together.”

The program in Knox County was paid for through a $900,000 grant contract with the Department of Children’s Services. That includes the cost of the program and personnel. The Safe Babies Court started operating in Knox County on January 2, 2018. The current contract between Knox County and the Tennessee Department of Childrens’ Services will expire in 2022 and have to be renewed at that time if it is to be continued. The contract was ratified by the Knox County Commission and several Commissioners expressed their strong support for both the program and its concept.

The safe Babies Court program has been in place in six other Tennessee counties; Coffee, Davidson, Grundy, Johnson, Madison and Stewart. Similar or identical programs will begin soon in Anderson, Dickson, Henry and Jefferson counties.

“Foster care is not the desired outcome of most cases involving children,” Judge Tim Irwin said. “The Safe Babies Court is a pilot program that I hope will work and keep families together and make them stronger and free from addiction.”