The Knoxville Focus for September 4, 2018

By design on September 3, 2018Comments Off on The Knoxville Focus for September 4, 2018 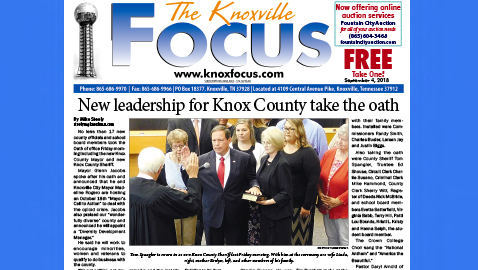 Mayor Glenn Jacobs spoke after his oath and announced that he and Knoxville City Mayor Madeline Rogero are hosting an October 18th “Mayor’s Call to Action” to deal with the opioid crisis. Jacobs also praised our “wonderfully diverse” county and announced he will appoint a “Diversity Development Manager.”

He said he will work to encourage minorities, women and veterans to qualify to do business with the county.

“It’s not politics, not government, but the people.” He called for unification of the efforts and concluded, “It’s time to get out there and kick some butt!” His remarks and the installation of newly elected Knox County Sheriff Tom Spangler were the two incidents that brought the packed crowd in the City-County Building to its feet.

The main assembly room was packed downstairs and upstairs with family and friends. One notable oath was that of Charlie Susano. He was accompanied by his wife Robin and took the oath from his father, Judge Charles D. Susano, Jr.

Outgoing County Mayor Tim Burchett spoke at the beginning of the installation ceremonies and introduced each newly or re-elected official, who appeared for the oath with their family members. Installed were Commissioners Randy Smith, Charles Busler, Larsen Jay and Justin Biggs.

The Crown College Choir sang the “National Anthem” and “America the Beautiful.”