The Knoxville Focus for September 8, 2020

By design on September 7, 2020Comments Off on The Knoxville Focus for September 8, 2020 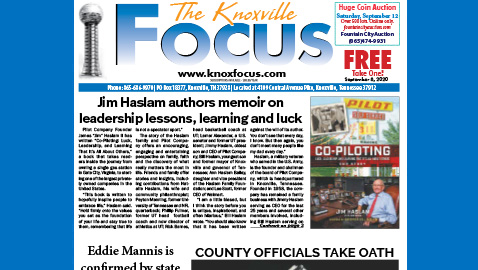 Pilot Company Founder James “Jim” Haslam II has written “Co-Piloting: Luck, Leadership, and Learning That It’s All About Others,” a book that takes readers inside the journey from owning a single gas station in Gate City, Virginia, to starting one of the largest privately owned companies in the United States.

“This book is written to hopefully inspire people to embrace life,” Haslam said. “Hold firmly onto the values you set as the foundation of your life and stay true to them, remembering that life is not a spectator sport.”

The story of the Haslam family and Pilot Company offers an encouraging, engaging and entertaining perspective on family, faith and the discovery of what really matters the most in life. Friends and family offer stories and insights, including contributions from Natalie Haslam, his wife and community philanthropist; Peyton Manning, former University of Tennessee and NFL quarterback; Phillip Fulmer, former UT head  football coach and now director of athletics at UT; Rick Barnes, head basketball coach at UT; Lamar Alexander, a U.S. senator and former UT president; Jimmy Haslam, oldest son and CEO of Pilot Company; Bill Haslam, youngest son and former mayor of Knoxville and governor of Tennessee; Ann Haslam Bailey, daughter and vice president of the Haslam Family Foundation; and Lee Scott, former CEO of Walmart.

“I am a little biased, but I think the story before you is unique, inspirational, and often hilarious,” Bill Haslam wrote. “You should also know that it has been written against the will of its author. You don’t see that every day, I know. But then again, you don’t meet many people like my dad every day.”

Haslam, a military veteran who served in the U.S. Army, is the founder and chairman of the board of Pilot Company, which is headquartered in Knoxville, Tennessee. Founded in 1958, the company has remained a family business with Jimmy Haslam serving as CEO for the last 25 years and several other members involved, including Bill Haslam serving on the board of directors and Whitney Haslam Johnson as chief experience officer and board member. Under the family’s leadership, Pilot Company has grown to become the 10th largest private company in America according to Forbes and is the leading supplier of fuel and largest operator of travel centers in North America.

The former Vols football captain played on the 1951 national championship football team led by coaching legend and mentor Gen. Robert R. Neyland. Haslam would go on to serve as vice chair of the University of Tennessee Board of Trustees and become a UT Distinguished Alumnus. The Haslam family recently contributed $40 million to the university’s Haslam College of Business, following a landmark gift in 2014 that established the business school as UT’s first named college and brings the family’s total historic giving to the university to more than $100 million. As a first-generation college student, Jim Haslam credits his first-class education as key to successfully founding Pilot Company and is passionate about creating opportunity for others to pursue higher education.

All proceeds from the sale of the book will benefit nonprofits that support small business, entrepreneurial and community-based ventures. It is Haslam’s wish that others be afforded the chance to be as fortunate in their endeavors as he has been in his.

The book is available online at copilotingbook.com and at other retail and online outlets, including select Pilot and Flying J travel centers. An audio version of the book, narrated by Vol Radio Network lead announcer Bob Kesling, also is available.